Imogen Sills has recently re-joined the British Sailing team as an IQFoil windsurfer - just like her brother & sister! Though she regularly has to share the limelight with her equally successful siblings, her story of how she faced periods of uncertainty is a lesson to us all. Read the exclusive interview with this trailblazing female athlete...

When asked what Imogen thinks her twin, Saskia, and eldest sibling, Sam, may describe her as, what immediately comes to mind is “lucky” and “carefree”. “The stuff that I’m passionate about I don’t go about in the same way as them” she explains, “I never really tell people [about] my goals and passions, I just kind of get on with them and they either work or they don’t…I think that could translate [to my siblings] as being unfocussed”. Despite this unassuming description, Imogen recently placed 9th at the iQFoil World Championships last October, gaining a fully funded position on the British Sailing team.

This has not been Imogen’s first foray in the world of sailing, and it is certainly not her last dance. Imogen’s journey into competitive windsurfing began as a junior athlete alongside her twin Saskia. However, due to a terrible injury Imogen saw herself dropped by British Sailing – an event she thought would break her for good. For some time, she did not want to have any involvement with the sport and she was ready to put her sails away forever. 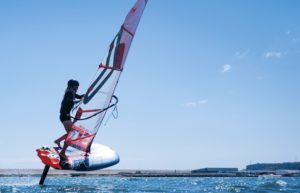 But as the saying goes, as one door closes another one opens. A short time after she received the upsetting news, Sam asked her if she would be interested in going to Norway to coach the junior windsurfing team as he could not fill the position. After some deliberation Imogen headed out to Norway for a trial period of coaching, falling in love with the sport from an angle she had not experienced much of: “I used to say getting taken off the team was the worst day of my life, but actually was the best day of my life. Now I look back and I just think, wow, if that didn’t happen, where on earth would I be now?”

The opportunity wasn’t exactly handed to Imogen on a silver platter though. Upon arrival it was evident that the team operated in a way that Imogen was unused to. The windsurfers sometimes clashed due to the belief that they had to compete against one another, causing uncooperative behaviour amongst them. In response to this, Imogen set course for an atmosphere of collaboration. Eventually she was able to instil the idea that teamwork was essential and “if you don’t work together, we’re not going to go anywhere”. The fruits of her labour paid off at the 2018 European Windsurf Championships in Greece with every athlete exceeding their expected result –  “they sailed another level than they’d ever sailed before” Imogen recalls. Imogen was overjoyed that she could be part of the experience: “I think that regatta is one I’ll never forget because it just showed that if you believe in yourself, and if you believe in your way and [let] people believe in you and you work hard, anything is possible.” She credits the Norwegian team for throwing her a lifeline and taking a chance on her, providing her with one of the most exhilarating opportunities of her life.

As a woman, Imogen’s perspective of gender in the sport has gained new insight from her coaching role. The most prominent factor was the number of female coaches in the sport overall. Though the athlete gender divide is narrowing in windsurfing, the male to female ratio in windsurfing coaching remains vast, with Imogen approximating the ratio to be roughly 8% women on the international scene. Research by Dr Leanne J Norman of Leeds Beckett University show that the percentage of female accredited coaches across all Olympic sports stood at just 11% at Rio 2016, with 89 out of 197 of competing countries having no female coaches whatsoever.

Imogen is thankful that her boss is highly supportive of engaging women in sports management roles, however she believes that women have to jump through many more hoops as coaches in comparison to men, purely due to gender bias. She also saw another side to the sport as the Norwegians had only began to offer a separate, dedicated race for women in September 2020. Prior to this, the cups which they raced for were open events and rarely allowed women to achieve any recognition. Imogen is nonetheless positive that change is happening outside of the UK – “the recognition of your efforts – no matter what gender you are – is really important”.

Imogen has now found herself in a position which she did not expect. Whilst working as a coach she was asked to try foiling at a British Sailing talent identification programme. Though she had not been on the board as a competitor for some time, it turns out old habits die hard. After grinding away through 2020 Imogen was once again a fully funded windsurfer, laying down an epic performance at the World Championships in Lake Garda, Italy. Now she has set her sights on Paris 2024, and is taking the advice of her older brother which he gave to her and Saskia: “work hard, girls, you won’t regret it.”

“I’m running five marathons in 50 hours for kids with the world’s rarest disease...”