Not only is Georgina Roberts Wales’ number 1 female shooter, she is also a coach, a columnist, a board member, a digital publisher, an ambassador for both The Mintridge Foundation and Women’s Sports Trust, and a university student. The Athlete Media Group had the pleasure of talking to Roberts, whilst wondering if there is anything that the trap shooter can’t do.

At the time of the interview in early December, Roberts was in-between homes: for her coaching role she is on the road and staying at hotels. Because of COVID-19, Roberts had not been home to Flintshire for a while as lockdown restrictions encouraged minimal travel between England and Wales.

The daughter of a farmer, Roberts had always been aware of sports shooting. However, her first involvement with the sport was at a local charity event on a give-it-a-go stand. After impressing (the now former) Great Britain shooting team member, Katie Cowell, Roberts was quickly taken under the wing of one of the coaches. Within the space of six months Roberts achieved her first Welsh cap, quickly transitioning and making an appearance for Great Britain at the Junior World Cup. “It was a bit of an emotional roller coaster” Roberts explains. Despite this she was very well supported and “very fortunate” that her school encouraged her to push her athletic limits: “it was a real life-changing year, going from no shooting at all to going through those different transitions. It was good!” 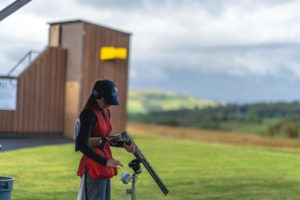 Limit-pushing remains at the top of Robert’s agenda, especially with 2021 holding much more promise than a turbulent 2020. If balancing a part-time business degree, a job in digital publishing and an elite career in shotgun shooting wasn’t already enough, Roberts is determined to add to her silver (or gold) ware. Upon being asked whether she prefers being an athlete to a coach she is quick to add that being an athlete is her current priority: “I want to win that medal, I want to go to the Olympics, I want to be an Olympic gold medallist – which you can’t do as a coach. You can coach an Olympic gold medallist, but I want to have that medal for myself [first]”.

Nonetheless, Roberts is certain that she wants to help people do the same in the future, too. At the age of 23, Roberts prides herself on being not only a successful athlete with plenty of ambition, but also a fully qualified shotgun coach with both ISSF D Coach and CPSA Safety Officer licences. Though competing as an athlete was her first love, coaching is definitely on the cards once she has completed her competitive career. “I love helping people and trying to help other people achieve goals using various different techniques” says Roberts, “and I don’t think I’ll ever be able to stop coaching [because] it’s something I feel so passionately about.”

Off the shooting range, Roberts’ commitment to the sport has seen national recognition. In 2019, she was the recipient of a Women of the Future Awards for her dedication to sport, beating multiple other recognised and decorated contenders. Talking to the British Association for Shooting and Conservation (BASC), Roberts spoke about how she didn’t expect to be even shortlisted, never mind winning, and the recognition of her hard work meant “the world” to her. 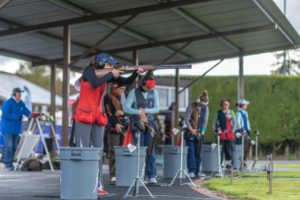 In such a short span of time Roberts has exceeded many people’s expectations, yet she still plans on pushing herself and harnessing her passion for the sport – this includes the championing of shooting as a sport for both men and women. Roberts highlights that she has been fortunate that few of her experiences in the sport have been negative, mainly emerging from a lack of understanding rather than ill-intention. Today the sport remains ‘very male dominated’ according to BASC, but there has been a great increase in female interest with shotgun certificates issued to women in England and Wales reaching over 1000 in number as of June 2019. The Telegraph also reported last year that ‘The number of firearms has risen from just over 435,000 in 2008/09 to more than 596,000 in 2018/19 with the number owned by women having increased by 10 per cent in just two years, from 32,400 to 35,600.’

Roberts has met many amazing women through the sport, however every one of her coaches have been men – all of which have helped her on her journey as both athlete and coach. Upon asking her what advice she would give to aspiring sportswomen, Roberts states every athlete should know why they do the sport. Knowing what the ‘why’ factor is, Roberts suggests, is the foundation of athletic enlightenment. Robert’s ‘why’ factor is threefold: “to protect and promote my sport…to encourage and inspire others” and “to strive for greatness”.