The world of equestrianism has been long associated with wealth and royalty. However, there is a growing movement to increase accessibility within the sport. Leading the charge is Event rider Lydia Heywood, who wants everyone to know that with determination and resilience there is chance you can place yourself amongst the stars.

Currently based in Cheltenham (the equestrian capital of the west), Heywood is not only looking to succeed on a personal level, but also on an athletic and entrepreneurial level. Heywood is Team Jamaica’s first and only black international level 8 Eventer. Typically the nation is known for its speed on the running track, with athletes such as Shelly-Ann Fraser-Pryce, Elaine Thompson and Usain Bolt dominating the papers. Now, Heywood is keen to put the country on the map for an entirely different sport. She is also aiming to diversify the sport with her organisation Cool Ridings, and her ground breaking Horse & Country TV series debut, Learning with Lydia, which aired in 2020. 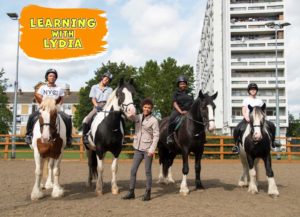 Heywood also volunteers as a mentor at the Brixton-based Ebony Horse Club, an organisation which aims to help the younger generation take the reins in all aspects of life, regardless of postcode. The club has recently gained a lot of support and attention, especially with one of its stars Khadijah Mellah winning the Magnolia Cup at Goodwood in 2019. This is one of the few organisations aiming to change the demographic in equestrianism, and Heywood is hoping to contribute. Heywood has so far shown great promise in Eventing (a three-programme event consisting of dressage, show jumping and cross country) with her eye on reaching four-star level during her career.

The owner of both a British and a Jamaican passport, Heywood made a conscious decision to represent a developing nation on the international stage. “I carry that Jamaican flag with real pride” explains Heywood, “and I know that pride would be contagious.” Breaking down stereotypes typically associated with horse riding are important to Heywood, thus she has made it her mission to support and encourage the involvement of minority riders, broadening the equestrian scene and making it a more inclusive space. 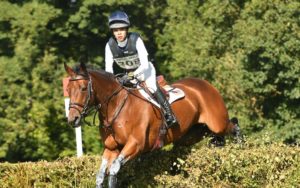 With over thirteen years of experience under her belt, Heywood is determined to build a pathway within the equestrian community for those who may be underrepresented by providing coaching and mentorship for diverse talent. Having personally experienced the difficulties riders from developing nations face – from accessibility, to networking and securing funds – she is now hoping to show that it is possible to make it in equestrianism, rather than it just being a dream.

It is a well-known fact that horse riding requires a considerable amount of disposable income, with high calibre horses fetching prices of around £300’000. Heywood is unlike many athletes of her standard as she does not have support from an internationally funded programme. She is therefore a self-funded athlete and works five days a week to make sure that she can feed her horses Flynn and Mink, pay entry fees, and kit herself out. She has been fortunate to land some exciting sponsorship opportunities, but there is a considerable way to go if she is to progress further. She is also keen to grow her string of horses so that she has as much choice as her competitors, who will have “10 to 20” horses to choose from.

An increasingly popular phrase in the sporting community is that “you have to see to be”, meaning that if you want to pursue something beyond your dream you have to have the inspiration first. Heywood is hopeful that Cool Ridings will achieve this over the coming years, widening the participation levels so that equestrianism it is more representative of the national demographic. 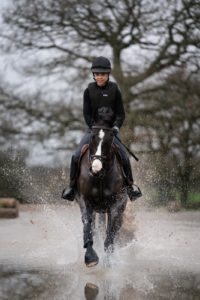 Heywood is personally inspired by Alex Hua Tian, a British-based Chinese event rider who has competed at both the Beijing 2008 Olympics and the Rio 2016 Olympics. “He’s got a lot of quality horses he’s brought a developing nation up in a sport that I love” Heywood comments “So that’s someone that I really look to emulate”.

Moving forward, Heywood is hopeful that the sport can appeal to a wider demographic if there is greater investment in making horse riding more accessible and sustainable to a variety of communities. Heywood acknowledges that she is spearheading diversity in Event riding, mentioning that she has “never met a black event rider”. For now, Heywood will continue to be one of only a handful of black event riders on the scene, yet her trajectory for 2021 is rapidly climbing and greatness is within reaching distance. Ensuring that she and her cause is a force to be reckoned with, and no doubt one which will blossom in the very near future.