When 31-year-old Hannah Rankin tops the bill at Glasgow’s Hydro on May 13th the super welterweight champion will be making history. She’ll be the first female champion to headline the prestigious venue when she takes on Alejandra Ayala in a bout that has had such high-ticket demand that it had to be moved from the nearby Braehead Arena.

Hannah is probably the first boxer of any sex to be a professional bassoon player and an alumnus of the Royal Academy of Music but they are both passions she meets with equal force and determination.

In a way she has her mum to thank for both music and boxing.

Hannah’s mum Clare passed away in her early 40s from an unspecified type of cancer and it was the trauma of her death which led her to the sport.

“I lost my mum just before I went into boxing,” says Hannah.

“She actually passed away from cancer and that’s what drove me into sport a bit more because it was something I could take my frustration and anger out on. Also, I could take time out and not think about her being sick at the time.

“She passed away six months after the diagnosis it was very, very quick and it made me I appreciate the ‘family’ I had in the boxing gym. The people there didn’t know my personal family and friends and my musical life, which is what I associated with my mum so it’s probably why I have given so much into the sport itself – because it gave so much to me. It was there for me at a really difficult time.”

Although, her primary career is as a bassoonist, Hannah was keen on sports from an early age.

“ I did taekwondo when I was a kid but I didn’t come back to boxing until my early 20s when moved down to London.

“I was really enjoying it and thought I really want to compete in this so I did some white collar fights for charity and then I thought ‘I really love this I want to go to the next level’. The options were join an amateur club or stay with my team and try and go professional. So I went and got some experience with some pro fighters sparring with them and here I am 16 professional fights later. And two times world champion. 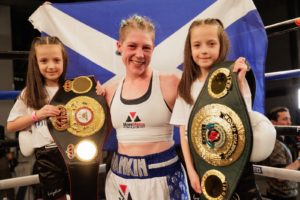 “I’m a very driven person. I was in London doing a Masters at the Royal Academy of Music and to be an elite level musician you’ve also got to be pretty driven. I’m very competitive with myself and also if I find something that have a passion for, I like to put 150 percent into it. It’s not often you find things in your life that you’re truly passionate about. 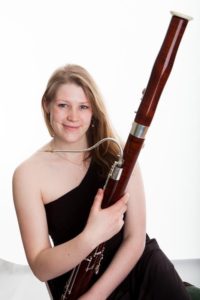 “I didn’t start out to become world champion, I started to see how far I could go in sport. It was a very late start as most people train from when they are very young so for me coming into it my 20s was a real different situation. But with the right team around you and a lot of hard work you can do great things. I like to try and explain to others that you might find your passion later on in life but you find it, don’t give up on it because it will give you great joy.”

It seems unbelievable that women’s boxing only became an Olympic sport in 2012 and before that it wasn’t really taken seriously amongst the public.

All that changed recently says Hannah.

“In all the other combat sports there’s always been female fighters. Thai boxing and karate and judo, women have been involved in that for a long time. But boxing is relatively new sport for women professionals to be honest. And I’m really proud to be at the forefront of change especially as women’s boxing has really taken off in the pandemic. People were stuck in their houses with nothing else to do and we had a captive audience, so it was great.

“Eddie (Hearn) decided to put on women’s title fights, and I don’t think a single one of them fell short of spectacular.

“I mean we all have other careers – we all come from different backgrounds, but we all lay it all on the line and there’s all-out war in the ring with people appreciating it.”

Hannah is jokingly referred to ad the black sheep of the family as her two sisters Emma, 30 and Alice 28, as dad Andrew, are all farmers but her passion lay in another direction, music and she discovered she was very good at it.

“It was another coming late story really,” she admits.

“I started on the piano, but I gave that up because I want to do Tae Kwon Do but my family was always musical. My mum played the piano, the French horn, the cello my grandad was a music teacher, so music has always been a big part of my family. I started on the flute and was doing my grade 7/8 and an old lady donated a bassoon to the Hermitage Academy in Helensburgh my secondary school. She was mortified that we didn’t have a bassoon, so she very generously donated one. And I thought, you know what I’ll have a go at that. It’s a bit different from anything else and it turned out to be the instrument for me. And I fell in love with it and a year later I was in the junior department of the Conservatoire of Scotland, then I went on to do my undergraduate there. And to do my masters and professional diploma at the Royal Academy of Music in London.”

She has travelled all over the world with various orchestras but very close to her heart is her own quintet, The Coriolis Quintet.

“We work with a company called Live Music Now, specifically and we give interactive concerts in care homes and in schools for children who have special learning difficulties. So it’s my other passion. People go ‘oh which do you love more?’ and the answer is music has been with me my whole life and it will not be something that will ever change. It’s my first passion and I love it but obviously, boxing is a short-lived career and you’ve got to make the best of it whilst you’ve got time. So, I put everything into the things I love but at the moment boxing is taking the dominant role.” 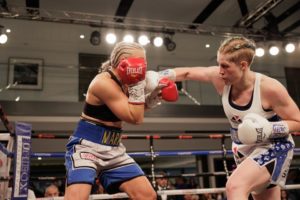 “I’ve played with lots of different orchestras I’ve travelled to places like Mauritius, India performed in Poland, Germany I’ve been to loads of places. The best thing about being a musician and a boxer is that you get to travel.”

Another charity Hannah has been involved in is Addaction in her native Scotland, now renamed as We Are With You.

“When I was up at home me and my coach have done talks and met the people at the group there. It’s really important because in Scotland they have quite a lot of problems with drugs and alcohol and for me it’s an area where I’d like to support people. I don’t know anybody that hasn’t been touched by somebody who has problems with alcohol in their life. It’s something we don’t even talk about very much, but it should be talked about and I’m a big advocate for supporting these sorts of charities, especially charities that help homeless people with a drug addiction So that’s a passion I’d like to be more involved in with my boxing. Anything I can do to raise awareness.”

Hannah is currently on a gruelling training schedule that involves, sparring, cardio, weight training and a diet to ensure she achieves the specified weight of 64.8k for her championship bout.

“At the moment I’m working alongside a great sport science guy called Andrew Usher and he’s at the forefront of some word leading research into performance, especially with combat athletes. It’s ground-breaking research and I’m very proud to be part of that as well.  My body’s in incredible shape and I’m going to be able to showcase that on fight night.”

As well as her dad and sisters, there’ll be one person who will be uppermost on her mind when she steps into the ring on May 13th and that will be her mum, Clare.

“I know my mum would have been really proud,” she says.

“She used to come to my taekondo competitions and my dad said she was a nightmare, she always wanted to get in there and get involved so it’s probably safer not to have her there to be honest!

“But she is one of my main inspirations when I get in the ring. To show people what you can do with your life and appreciate it. Follow your passions and your dreams because you never know what’s going to happen. She’s with me every time I walk into the ring.”

“As difficult as it might get, it will never be as hard as losing”

“Making a positive difference is my calling” | Stacey Copeland