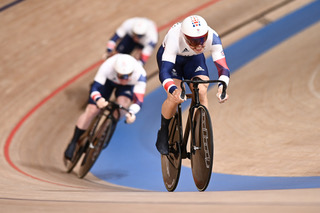 Having been drafted last minute into the team as travelling reserve for Rio 2016, Ryan has since enjoyed consistent success on the world stage, including medals at the World Championships, European Championships, Commonwealth Games, and UCI world cup rounds. Following the postponement of the Olympic Games in 2020, Ryan ﬁnally got his opportunity to line up on the biggest stage at the Tokyo Olympics in 2021, winning a silver medal in the Team Sprint alongside teammates Jason Kenny and Jack Carlin.

Away from the track, Ryan is a passionate ambassador for men’s mental health. Following the compounded disappointment of the Olympic postponement together with the isolation of lockdown, Ryan took inspiration from his former coach to begin leading Men’s Groups. Centred around providing a secure and supportive space for men to discuss life’s challenges, the groups provided an outlet for many throughout the Covid-19 pandemic and into the present day. Alongside his groups, Ryan is an ambassador for the men’s mental health awareness organisation ‘Blokes’, and a keen advocate for better provision and communication in this area.

Alongside training for Paris 2024, Ryan is taking active steps to look ahead to his future beyond sport and is studying an MBA at London Business School from August 2022.