British explorer Pen Hadow (57) launches the #Protect90North campaign to create the world’s largest wildlife reserve for the international waters surrounding the North Pole. The reserve will become the refuge-of-last-resort, a refugium for the region’s existing wildlife and the rising number of species heading north to these, the planet’s coolest waters in an attempt to survive global ocean warming.

The reserve’s science-only status, excepting military submarines, will prevent vessel-based commercial and exploitative activities from adding even more stresses on the region’s unique and super-vulnerable ecosystem.

With 40% of the Central Arctic Ocean’s 2.8 million square kilometre sea-ice habitat no longer present in recent summers – and a year-round total absence of sea ice possible within decades driven by the Arctic amplification effect – the plants and animals of the floating ice-reef ecosystem, which depend on the presence of sea ice for all or part of their lifecycles, find themselves responding to an existential crisis due to the unintended consequences of human activity elsewhere. 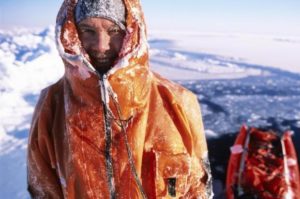 In addition to this ocean’s fast-changing environmental conditions, the wildlife now faces imminent threats from disruptive, damaging and destructive commercially-driven activities. These are possible for the first time in human history due to the shrink northwards of the sea-ice, which previously presented a natural barrier to surface vessels. The wildlife includes some of the world’s best-known mammals: Polar Bear; Bowhead and Gray Whale; Beluga; Narwhal; all three Walrus subspecies; and the Arctic’s six seal species, Harp, Bearded, Ringed, Spotted, Hooded and Ribbon. All these species are biological indicators of the scale of the food-web that supports them and is now at risk from the currently observed and projected changes linked to the accelerated climate change in the region.

Hadow stated: “Many species have evolved extreme physiological and behavioural adaptations to survive and thrive in the darkest, coldest and only perennially sea-ice covered ocean. The risk of species extinction is reduced if avoidable direct human stressors are taken out of their survival equation. And bolstering species survival at all levels within this ecosystem’s complex web of life will bolster the potential for a sustainable future for the human population, too.”

The campaign is to catalyse support from the public worldwide and the growing number of increasingly concerned parties. These include the Arctic’s circumpolar peoples, whose cultures and livelihoods depend on the healthy biological functioning of this ecosystem, global environmental organisations, and regional and international governments, who are now recognising the urgent need to optimise the resilience of the Central Arctic Ocean’s exceptionally challenged marine life. The reserve status is to be secured through the United Nations by international treaty by 2032.

In 2003 Hadow completed the first solo journey without resupply, from Canada to the North Pole – a feat that hasn’t been repeated (and likely never will be due to the deterioration in sea-ice conditions). It was his extraordinary experience having to swim cumulatively for more than 30 hours between the ice floes during this solo 64-day ‘trek’ that triggered Hadow’s rest-of-life mission to research and protect the region’s uniquely vulnerable wildlife.

In 2017 Hadow led the sailing expedition, Arctic Mission, which saw its two vessels become the first ever to enter the Central Arctic Ocean without icebreakers.  Its purpose was to demonstrate access to larger commercial vessels was already possible. Hadow has spent more time travelling across the Arctic Ocean’s sea ice than most as a professional guide, scientific expedition leader and pioneering explorer. Over the last 25 years he has witnessed first-hand the large-scale environmental changes taking place around the Pole.

A precursor to the #Protect90North campaign was well-received address by Hadow to the United Nations International Maritime Organisation in October 2018, in support of a ban on the use of heavy-fuel oil by shipping in the Arctic Ocean – an intervention which resulted in applause from the delegates led by the UN IMO Secretary-General. Ends

Note 1: Marae Moana is the world’s largest nature/wildlife reserve/park at present. It is a 1,976,00 sq km marine reserve around the Cook Islands in the South Pacific Ocean.

Note 2: The UN is currently hosting negotiations for terms to be introduced to the UN Convention on the Law of the Sea (UNCLOS), which oversees the governance of international waters (aka high seas) worldwide, that will enable legally-binding protection of international waters where biodiversity is proven to be critically endangered.

Note 3: In a series of steps towards full marine reserve status, the next step is to have the Central Arctic Ocean accepted for ‘Other Effective area-based Conservation Measures’ – draft definition from IUCN/WCPA (Jan 2018): “A geographically defined area other than a Protected Area, which is governed and managed in ways that achieve positive and sustained long-term outcomes for the in situ conservation of biodiversity, with associated ecosystem functions and services and where applicable, cultural, spiritual, socio–economic, and other locally relevant values”.

“I’m running five marathons in 50 hours for kids with the world’s rarest disease...”