UK Athletes Making A Stand Beyond Their Sport
Min Read

There has never been a better time for an elite athlete to build a strong personal brand rooted in a purpose that matters to them.   Those athletes who use their powerful voice & influential platform to positively impact society at large will build a personal brand that attracts loyal, passionate fans & more valuable commercial opportunities.

As South Africa’s 2019 Rugby World Cup-winning captain Siya Kilosi said at a recent Awards evening in South Africa,  “We may break all the records and lift all the trophies and medals, but someone else will come and do the same after us. if we don’t use our influence to make an impact now, we will be forgotten. The lives that we touch and change will last forever.”

There are an increasing number of inspiring stories about athletes impacting their nation through sport & community. The Athlete Media Group are privileged to know many elite athletes and experts who are champions of such purpose and we are proud to support their causes.  This trend of athletes using their powerful sporting platforms as a force for societal good is growing fast and will become a defining ‘off-pitch’ trend in sport in the next decade.

We’ve taken a look at the very best purpose-driven athletes making a positive difference beyond their sport.

She is also an avid conservationist and founder of the brilliant Tofauti Foundation that protects ecosystems, environments, people and wildlife in Africa.  Team Tofauti believe working with local people is the only way to help humans and animals to co-exist and thrive together.  As the human population in Africa grows at pace, their demand for land is constantly increasing – land for dwellings, subsistence farming and livestock grazing.  This means the wild animals who have roamed the land for generations are being forced to compete for spaces they are used to calling their own.  Crista is passionate about making a difference and has delivered numerous successful projects across East Africa with many more in the pipeline.  Visit www.tofauti.org to read more about the tremendous difference Tofauti is making.

Duncan joined the RAF at 19, enjoying a range of posts across the military. In 2009 Duncan was on patrol in the Helmand region of Afghanistan when the vehicle he was travelling in hit an IED. Duncan was thrown forty feet by the impact and suffered breakages to his legs, ankles, ribs, lower back, shoulder blade and left arm. The only unbroken part of his body was his right arm. After 12 months of rehab it became clear that both legs must be amputated in order for Duncan to be able to walk pain free.
Duncan is a wounded military veteran who became the first ever double amputee to race to the South Pole as part of military charity Walking With The Wounded’s expedition team in 2013. He also became the first double amputee to successfully complete the world’s toughest footrace,  the Marathon Des Sables, in 2017.
Duncan has raised invaluable support and funds for the charity.
After being injured in Afghanistan, Duncan is determined to prove the doubters wrong and show that limitations are only in the mind. He also hopes to give inspiration to others in similar situations and is the First Ambassador to the British Citizen Awards and passionate supporter and ambassador for Walking With The Wounded.  In 2020 Duncan is returning to run the Marathon des Sables to mark 10 years since his amputation.  Visit www.walkingwiththewounded.org.uk to read more about the excellent work the charity does for physically and mentally wounded military veterans. 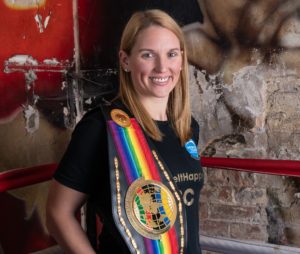 Stacey Copeland is an ex-professional England footballer turned professional boxer.   As a footballer she represented England U18s, played in an FA Cup Final and has also played abroad in America and Sweden. As an amateur boxer Stacey won a European silver medal and has now turned professional, winning the Commonwealth title in 2018, the first GB female to do so.  She is also part of the only father/daughter combo to both win national boxing titles.

In 2017, Stacey set up the ‘Pave the Way’ project in partnership with Greater Sport Manchester and Parrs Wood High School.  Since then the project has grown and is now under application with the charity commission to become a registered charity, the decision should be received by early 2020.  Pave The Way aims to create a world where gender is never a barrier to human potential, challenging gender stereotypes for boys, girls, men and women and working to spark a social change in attitudes so that everyone can be free to pursue their passions regardless of gender.  Stacey won the 2017 Sky Sports Woman of the Year Award and in 2018 was nominated for the Sunday Times Sports Woman of the Year in the Grassroots category.   To read more about Pave The Way and Stacey’s drive for change visit www.stacey-copeland.com.

As an explorer, Pen Hadow has pushed back the boundaries of what is known.  His iconic solo trek from Canada to the North Pole has never been repeated, and his leadership of scientific exploration on the Arctic Ocean is without equal.
Pen’s mission now is protecting the wildlife of the North Pole’s international waters.  He believes exploration of the natural world has never been more relevant in human history, with the continued existence of our species now dependent on improving our understanding and management of the natural world.   Pen continues to lead an influential non-governmental scientific and public engagement programme, Arctic Mission – an annual expedition programme in support of the international advocacy work of the 90ºNorth Unit.

Pen’s 90North campaign aims to create the world’s largest wildlife reserve for the international waters surrounding the North Pole. The reserve will become the refuge-of-last-resort, arefugium for the region’s existing wildlife and the rising number of species heading north to these, the planet’s coolest waters in an attempt to survive global ocean warming. The reserve’s science-only status, excepting military submarines, will prevent vessel-based commercial and exploitative activities from adding even more stresses on the region’s unique and super-vulnerable ecosystem.    To learn more about 90 North visit www.penhadow.com 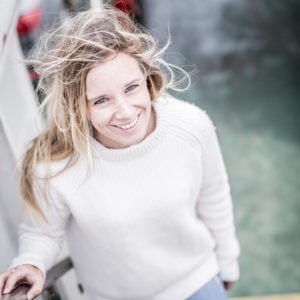 Hannah Mills, MBE is a British sailor and 2 time world champion in the Women’s 470 class, having won in 2012 and 2019. Mills won a silver medal for Team GB with her crew Saskia Clark in the 2012 Olympics, and won Gold in the same event at the 2016 Olympics in Rio de Janeiro.  She is aiming for Gold in Tokyo in 2020 with her new partner Eilidh McIntyre.

Her passion and expertise for sailing from a young age has seen her develop a deep understanding of the devastating impact plastic is having on the world’s oceans.  As a passionate advocate for clean oceans she founded Big Plastic Pledge in 2019. By harnessing and unifying communities through the power and reach of sport, through the athletes, events, fans, volunteers and brands, she aims to make a lasting impact and has early endorsement from the International Olympic Committee (IOC).  Big Plastic Pledge is a movement within sport that aims to grow into something un-stoppable when it comes to achieving its goals. As athletes and fans united, they are a group determined, passionate and driven to achieve.  Visit www.bigplasticpledge.com to make your pledge and help protect the planet from plastic waste.

Born blind in his left eye, childhood was turbulent for Si at times, but one passion always shone throughout – sport. Aged 14, he was scouted by the England Visually Impaired (VI)  cricket team and went onto win three Ashes series before injury forced him to retire. Luckily Si recovered to continue his career; although his cricketing ability is unquestionable, a passion for rugby always stood out. Working with his former cricket coach, he helped launch the VI England rugby team and had the honour of scoring the first try in the inaugural tournament.

However, life wasn’t always plane sailing. During his time living in Brighton, Si became distracted in off the field issues which led to him being involved in organised crime. Coming through the other side, he went on to work successfully with global recognised charity, The Change Foundation, to help get people out of violent gangs, off the streets and into sport and employment.  He is proud to have helped many young men and women find jobs away from the streets.  To learn more about the work of The Change Foundation visit www.thechangefoundation.org.uk

Sally Orange is a force of nature.  Her CV suggests so!  Physio, Inspirational Speaker, Endurance Athlete, 7 World Records, Invictus Games Medallist, 49 Marathons, 7 Ironmans.  After serving in the military as a physiotherapist, she turned her attention to raising money for wounded army veterans through the charity ‘Walking with the Wounded’ as well as raising awareness and ending the stigma surrounding mental health.

Sally looks to use her participation on marathon and ultra running to inspire others into participating in sport.  She has also taken to applying her talents to mentoring, educating and organising, bringing inspiration to a variety of audiences including a series of events aimed at children. These interactive workshops promote health and well-being through physical activity and healthy eating, dispelling myths on mental health and engendering confidence, by telling her own story with honesty, humility and humour.

Kiko Matthews is a world record British adventurer and environmentalist.  On 22 March 2018, she became the fastest female to row the Atlantic, solo and unsupported. Matthews rowed the 3284 miles from La Gomera to Port St. Charles, Barbados in 49 days 7 hours and 15 minutes.

In May 2019 she set off on her bike to cycle the coast of the UK and part of Ireland in a project called #Kikplastic.  She was joined by volunteer riders from companies including Rathbones and bike specialists, Pinarello nd many more. On most evenings of the challenge she completed a local beach clean.   Her focus for this project wasn’t to be the fastest, but to raise awareness of the problem of single-use plastic and engage communities to help tackle it.  By the time she finished back in London on the 28th July Kikplastic had cleared 3.45 tonnes of waste and engaged just under 2,000 volunteers.  Kiko aims to repeat Kikplastic across Europe’s beaches in the summer fo 2020.  Visit www.kikomatthews.co.uk/kik-plastic to learn more about her determination to change the world for the better.

As a trans woman in motorsport, Charlie occupies a unique role within her sport and within the LGBTQ+ community, making her a perfect fit for brands looking for a strong & charismatic ambassador to champion their ability to challenge the status quo.  Charlie Martin represents a paradigm shift in motorsport that has never been seen before and has captured the imagination of people around the world.  Her story has been shared on national television in the national news and in some of the most prestigious international publications.
Her fearlessness both in and out of the car makes Charlie one of the most eye catching and engaging drivers competing in international motor racing today.  Her tenacity & self-belief have helped her to overcome the impossible and push for change when the odds were stacked against her.  In a sport that lacks visible diversity, she stands out. She is changing perceptions and championing inclusivity.  She regularly appears on the media talking about the role of transgender athletes in sport today.  Visit www.gocharlie.co.uk to read more about Charlie’s journey.

If you want to work with any of these champions of purpose (as inspiring speakers, in advertising, with content creation, as brand ambassadors & more) please email mark@athletemedia.co.uk or call 07952 304340.

"The most fun in 60 seconds you could ever have!" | Adam Baird, GB Bobsleigh