A former prisoner, who is one of the UK’s top paddleboarders, is taking on a world- first challenge while achieving 100% carbon neutrality. David Haze, aged 37, plans to paddle around the 70-mile Isle of Wight coastline on a five-day challenge without impacting the earth in any way.

And he hopes to be 100% carbon neutral with all of his equipment – with every single item he carries, uses or wears either fully recycled, recyclable, eco or environmentally friendly.

He will also wear recycled clothes, shoes and natural suntan lotion while sporting sunglasses and a towel made from fishing wires.

Haze will use a bamboo toothbrush and eco-friendly toiletries, eating locally sourced sustainable food and sleeping on beaches during his five-day eco adventure.

However, key to the Great Green Paddle project is a custom-made, totally recycled, 14-foot white SUP board. 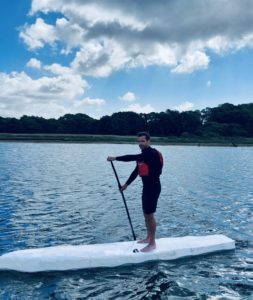 Nicknamed Iceberg, it was crafted by a boat engineer and is made from wooden scaffolding, house insulation and boating shrink wrap.

“It’s a work of art, there’s nothing like it, it was created from materials pulled from a skip and it’ll probably be the only iceberg you’ll ever see off the Isle of Wight” he said.

Haze, from Bournemouth, kicks off his top-to-toe environmental challenge on 1  August – to coincide with the Cowes Regatta – and is teaming up with Empower Energy to attempt the world’s first completely carbon neutral environmentally friendly expedition by SUP. 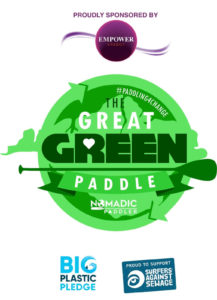 David hopes to raise more than GBP1,000 for Surfers Against Sewage during his solo trip and boost awareness of UK double Olympian sailor Hannah Mills’ Big Plastic Pledge; which asks athletes and their fans to reduce the use of single-use plastic.

He descended into a life of crime and drug taking, went on the run after arrest, twice tried to commit suicide and ended up with two stints in prison for burglary and handling stolen goods.

After enrolling in a prison reform programme, at HMP Guys Marsh, he turned his life around: “For the first time in my life I learned to ask for help and to accept it – I realised my previous lifestyle was unsustainable and my whole outlook changed.”

David took up paddle boarding “for the sense of freedom it gave me” and now divides his time between his sport, working in penal reform, fundraising for charities and mentoring young people.

Since his u-turn he has notched up seven SUP world records and set his sights on adding two more world records to his growing collection later this year.

In late August he heads to Iceland in a bid to paddle across its longest lake, Lögurinn, in the fastest time. Lögurinn covers an area of 84sq km (32sq m) and, to break the record, David, need to cross it in under six hours.

Then, in September, he will attempt to break 33 SUP world records on 33 lakes, across 33 European countries, in 66 days.

Haze, who currently works as a consultant for the Criminal Justice System,

Said: “It’s not all about pursuing world records. I share my story to highlight the importance of reform and rehabilitation and to show others that our pasts and mistakes do not define who we are.”