With the Tokyo Olympics pushed back to 2021, the Commonwealth Games set to be in Birmingham in 2022, and Paris 2024 not far after, Team Biakoloz-Batrane’s future competitive calendar is looking to be explosive. The young duo have set their sights high, with hopes of being the first English men’s team to qualify for Olympic beach volleyball.

Olympic-level beach volleyball is a relatively new competition compared to other Olympic sports such as athletics, cycling and swimming, having only being added as an official sport at the 1996 games in Atlanta. Perhaps this is why it is yet to enter mainstream sports in the UK, despite an increase in facilities since its Olympic debut. Britain’s first beach volleyball team to make the Olympics, Audrey Cooper and Amanda Mo Glover, had to train in Amsterdam as the UK had no beach volleyball courts at the time. Fast forward to 2020 where there has been considerable uptake on beach volleyball, with team Biakoloz-Batrane looking to put the sport firmly on the British map by becoming the first British men’s volleyball team to qualify for the Olympics. 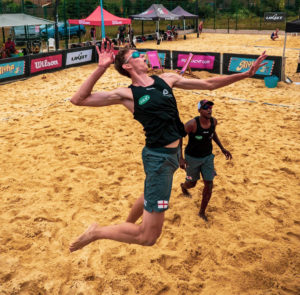 Having played with seasoned beach volleyballer Chris Gregory for some time, Issa Batrane was looking for a new partner to match his hunger for future competition. Batrane had recently moved to The Netherlands, not knowing who his partner was going to be for the upcoming seasons. He and his coaches created a spreadsheet listing the strengths, weaknesses, opportunities and threats of potential teammates to analyse who would be the best fit. They wanted a good blocker who was smart – “and basically every single box Freddie [Biakoloz] checked”. After the “no brainer” decision to form a team, the duo competed in France before deciding that the coupling would be a long-term decision.

According to recent statistics[1] volleyball is one of the less popular sports, with reports estimating that 47,000 Brits participate in the sport compared to the  2.1 million who play football and 224,400 that play rugby. Regarding the fact that beach volleyball is a small percentage of the overall volleyball number, it is arguable that the sport is somewhat niche. It is surprising that the uptake is not larger considering the advantages of playing the sport. Batrane became involved in beach volleyball as he was looking to keep off the summer pounds and “[trying] to stay in shape” when he wasn’t playing indoor volleyball. Later he won the junior British Beach Championships and decided to stick with it. Biakoloz came about the sport differently. His parents both being volleyball players, he naturally followed in their footsteps and was the sole junior member at Crystal Palace Club at the age of 14. 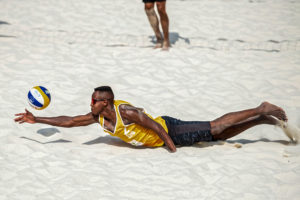 The pair have found stark benefits in playing beach volleyball, both physically and mentally. The additional challenge of playing in sand contributes to the athlete’s aerobic capacity and strength ability which Batrane enjoys: “ I do feel the benefits because when I do get a little bit of time off, my body kind of feels good just to get on with everyday life”.  Nonetheless, it would appear that the most salient feature of beach volleyball is the effect on the athlete’s psychological wellbeing. Both Biakoloz and Batrane cited the tight-knit spirit of the sport, the “community aspect” being something which they found great solace in: “we rely on each other to be able to talk and mentally feel well enough to be able to talk about whatever it is that could be bothering us at the time, so you kind of feel in a really good, close group”. Playing out in the sunshine is also a constant factor of the sport, and one which Batrane suggests contributes to the good-vibe feel of the sport as “it always makes people smile”.

Despite volleyball being generally non-mainstream in the UK, the statistics[2] reported by governing body Volleyball England suggests that the sport is highly diverse with “63% of the 6000 participants in the [Higher Education Volleyball Officer] programme being from a BAME background and 51% of the registered players in the National Volleyball League being from a BAME background”. The Volleyball England board is also diverse “with a 50/50 gender balance with BAME, LGBTQ and disability represented on the board”. However, these statistics are not reflective of beach volleyball itself. Batrane estimates that “the percentage of those from the black community [that play beach volleyball] is pretty much under 20 people in the country”, as well as his team being the “only British pairing that has a player…from the BAME community”. 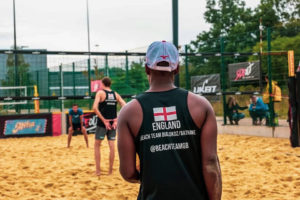 Because of this, AMG and Biakoloz-Batrane discussed the recent movements of the Black Lives Matter campaign (also known as #BLM). Batrane is a vocal supporter of BLM, and a firm believer that athletes have a level of responsibility when it comes to supporting these causes. Elite athletes are making their stance known more and more in the fight for equality. Most recently, US Open grand-slam winner Naomi Osaka wore a mask naming different victims of racial injustice – specifically Breonna Taylor, Elijah McClain, Ahmaud Arbery, Trayvon Martin, George Floyd, Philando Castile, and Tamir Rice – for each of her appearances. Batrane echoes Osaka’s involvement: “For me, I think that being able to speak, to express why equality is important in all aspects of life, whether you’re black or white or wherever you’re from. That shouldn’t be a political statement”. Other athletes involved with BLM such as Lewis Hamilton are role models for society argues Biakoloz, adding that their position and platform gives them a real ability for “championing these positive messages”. 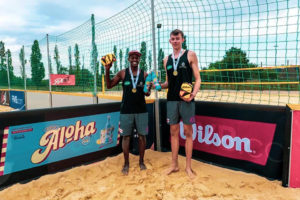 “Everybody deserves to be on that even playing field” Batrane comments, which highlights the profoundness of his plight in tackling racial inequality from within the sport. Beach volleyball’s global popularity provides great promise for diversification in the sport, as well as the appeal of the beach-party atmosphere coupled with intense competition. The duo hope that more people can get involved with the game – not only because “People have so much fun playing”, but because the sport is so inclusive. Greater exposure, Batrane says, would strongly improve British beach volleyball as we know it: “I feel like everybody should have a chance to play it”.