From playing football on Mount Kilimanjaro to TED talks to pioneering a sports brand, Laura Youngson is possibly one of the most inspiring entrepreneurs in sport today.  Our intrepid reporter, Olivia Howe, spoke to the CEO of new sports shoe brand, Ida Sports, about her ambitions to level the playing field for female athletes.

As the interview begins, Youngson lists the activities she was involved in from a young age: “We’d go cycling and play tennis and do all sorts of things. As a kid, I did a lot of ballet – that was my thing… a lot of hockey [but] there wasn’t really the opportunity to play football. I played in the garden with my brother and cousins, but other than that it wasn’t really a sport for women”.  Times have certainly changed since Youngson’s first interaction with the game – in 2018 the Women’s Super League (WSL) became fully professional, the women’s football World Cup in 2019 surpassed 1.12 billion viewers, and the latest figures from The FA reveal more than 2.63m women aged 16 and over in England now play football. Youngson’s realisation that she enjoyed football and being part of a football team wasn’t until university – since then, it has been “a big part” of her life. 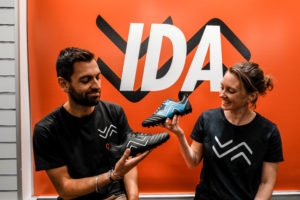 Much like AMG partners Resilient Nutrition, Youngson’s desire to change attitudes towards women’s sport was due to “a culmination of a lot of frustrations”. She often saw that men’s amateur teams were receiving salaries, whereas elite women’s teams could not afford to play without a job to help fund them. Media outlet The Conversation reported in 2019 that 89% of women footballers consider leaving the game early and were looking for opportunities outside the sport, with low pay and precarious contracts playing a significant role.

It was because of this that Youngson decided that women’s sport needed to be promoted, showing that women were capable of great physical triumphs. 90 minutes of football at 18,799ft after reaching the 19,330ft summit were completed by women of various ages from around the world, making history and breaking records. Entering the record books was not the primary purpose for Youngson however, rather “it’s about the stories and the conversations you can have off the back of it in order to create positive change.”

The gender divide in football was not continually present in all sports Youngson commented, as she was a regular participant of futsal in Melbourne, Australia, where the inclusion of both genders is “really strong”. There is a greater focus on pitch performance rather than the division of genders, focussing on the team as a whole. Inclusivity and working together struck Youngson as important tenets in her, and eventually Ida’s, attitude to the sports world. 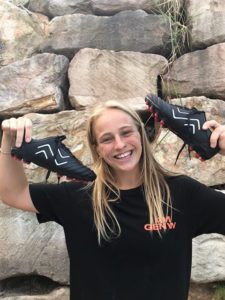 A major downfall that hindered sports inclusivity, Youngson realised, was the kit available for women. Not only were the products on offer by big brands ‘shrinked and pinked’, but they were also inappropriate for a comfortable experience. All too often women who wanted boots for grass sports – predominantly football and rugby – did not offer sizes small enough. In many cases, there was no women’s boot offered at all, and women who were some of the best in the game were wearing either men’s or kid’s shoes. “[I] went home, researched, [and] realised that actually women’s men’s feet are fundamentally different” Youngson recalls, “and that you’re putting yourself at risk of injury if you’re wearing the wrong boots.”

Instead of advocating for women’s shoes to be more readily available to turf sports athletes, she responded to the crisis by building an entire business dedicated to the cause instead. Along with her co-founder Ben Sandhu, Youngson’s research discovered that women generally have a different width to length ratio of their toes compared to men, different pressure loads and bend points as well as narrower heels and higher arches: “we cut up shoes. We really learned about. What it is that female athletes need and want.”

Ida Sports is about more than just business – it is a proactive response to closing the gender gap in women’s sports. The business aims to promote a philosophy that women have the right to be seen and heard. “We know that there are a lot of, players who are perhaps not getting the equipment and the contracts that they deserve. So can we start to push the industry a little bit, and improve conditions for players?” Youngson asks.

Upon being asked whether she thinks more needs to be done for the sportswomen Ida Sports are marketing themselves towards, Youngson highlighted the need for investment: “You have to invest to see a return. And I think that is where women’s sport is at the moment. When you do invest you see all these incredible things like higher numbers of participation, more medals…more engagement with fans.” 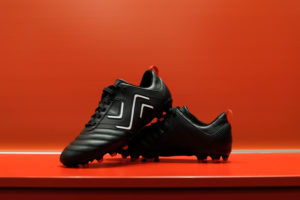 Not only this, Youngson argues, but companies such as Ida Sports need to exist as change isn’t “necessarily going to happen through the status quo”. She discusses the need to not only narrow the gender gap, but steer the direction of women’s football into a new, more positive direction: “Some of the systems that are in place are too entrenched to change and change fast, whereas the grassroots is demanding change. So by [Ida Sports] existing, I know for a fact that other companies connect with us and have been inspired” and they are consequently “doing great things”.

Consumers, and particularly female consumers, need to be more demanding in the eyes of Youngson. A major goal of Ida Sports is teaching consumers to be more demanding. Female athletes should not settle for equipment that is, at best, functional – rather they should push for change and wear boots that let them reach their athletic potential (and avoid blistered toes and blackened nails). For Ida Sports “if that means kind of standing up and being a brand that says, look, we’re made working for you, then that is that.”

Ida Sports have only scratched the surface with the introduction of their football boots ‘Red Dust’ and ‘Sky Blue’, with demand beginning to rapidly increase. As women’s participation levels grow, so does consumer demand. Consequently, Ida Sports is beginning to rapidly grow as a brand and they are developing their second version of turf boots: “Now we’re going to do it again and do it better.”