The Athlete Media Group has agreed on an long-term partnership with the award-winning British self-care brand, the YuYu Bottle, to team up with five of our elite female athletes. The partnership is the start of a number of exciting initiatives between our two businesses.

The YuYu Bottle is the world’s first wearable, multi-climate and body length water bottle and was first introduced to the world at Harrods in Knightsbridge, London, in 2012. It reached this prestigious department store’s list of 20 best selling products only 14 weeks into its launch. Since then, YuYu has grown from a company being run from a living room in Wimbledon, where friends and family handpacked each and every YuYu Bottle themselves, to becoming the provider of an internationally loved article and symbol of warmth. The 81cm long revolutionary invention by Richard Yu uses biodegradable natural rubber and promotes a more sustainable way of how we can keep our bodies cool or warm in our day to day lives. 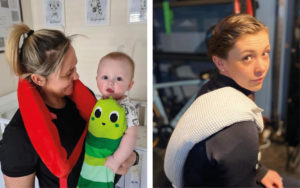 The YuYu has managed to build a strong sporting base with former Team GB Olympic runner and British 800m record holder, Jo Fenn (née Mersh) hired in 2018, as their athlete & wellbeing ambassador. They also signed the British athletics champions, Laviai and Lina Nielsen, in 2020 as their first athlete ambassadors.

The Athlete Media Group (TAMG) is the sports agency powered by purpose set up by media industry veteran, Mark Middlemas, in 2019. The agency’s aim is to make more meaningful, purposedriven connections between super hero athletes, their sports & like-minded brands and represents a number of elite athletes who are also catalysts for societal change away from their sports.

“I’m delighted to be associated with such talented & inspirational athletes who are making our invention even more revolutionary by taking it out of the home and into the sports field.”

“2020 was an incredibly tough year for many UK elite athletes both financially and mentally. To partner with such a warm, welcoming and inspiring brand like YuYu means these world class female athletes can bounce back even better from lockdown. YuYu’s team are right behind their journeys and we’re thrilled to be collaborating on some really exciting product and content projects together.”