In 1921, Scottish explorer James Mann Wordie led the first expedition to a little-explored  island in the Arctic, known as Jan Mayen. Now, exactly 100 years later, adventurer and writer Hugh Francis Anderson is doing the same with a small crew and the hope of an even bigger environmental impact.

Hugh’s career originally began at a luxury lifestyle magazine, quickly leading him to write about travel and the exciting, far-flung destinations holiday-goers may discover. However it was his own hunger for the unknown which caused Hugh to go freelance so he could pursue the adventure lifestyle more seriously. Hugh has always taken an interest in the planet and its rapidly changing environment, and has recently sought to make a difference through his storytelling capabilities.

Having recently become a fellow of the Royal Geographical Society, Hugh found himself perusing the journals of the institution, only to stumble on Wordie’s report of his expedition to Jan Mayen and the ascent of the island’s main peak, Mount Beerenberg. A notoriously isolated area of the world, few have travelled to the icy Norwegian outpost. Inspired by Wordie’s exploration of the dangerous and the untravelled, Hugh has partnered with marine biologist and former navy diver, Captain Andreas B. Heide aboard the research vessel ‘Barba’. 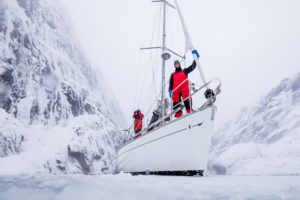 The Jan Mayen Expedition forms a critical part of the wider Arctic Sense 2021 project, a collaborative four-month scientific and communications expedition. The project is aiming to create a platform for scientists and storytellers alike surrounding ocean conservation via photo and film documentation. By examining marine plastic pollution in the Arctic, the team are hoping to contribute to the discussion of the climate crisis and raise awareness surrounding the rapidly changing situation.

With only a number of days separating Hugh and one of the biggest expeditions of his life, he is brimming with anticipation for what lies ahead: “We’ve got a phenomenal story to tell – both the marine research that we’re going to do with [research and marine conservation group] Whale Wise, but also this is a really wonderful opportunity to tell a piece of history and a cultural tale from the end of the heroic age of exploration.”

“The mantra for this expedition is ‘adventure with purpose’” Hugh tells The AMG. “It’s all very well going to remote places to do incredible things, but for me now, with the way the world currently is, unless there’s a purpose behind it I’m less interested in doing [the adventure]”. Hugh’s reflection on the journey that lies ahead is a particularly salient one with the recently released report by the IPCC stating that it is ‘unequivocal that human influence has warmed the atmosphere, ocean and land’ and global warming leaves the future of Earth’s ecosystems uncertain.

Consequently, the expedition will have a primary focus of data collection. Through scientific research, documentation, and storytelling, the explorers are aiming to conduct innovative research on the activity of marine wildlife surrounding the island of Jan Mayen. Additionally, when they scale Mount Beerenberg, the group will collect glacier samples to test  for ‘black carbon’, a component of soot emitted by the incomplete combustion of fossil fuels and biomass. “I’m so excited by the fact that we can actually do something good. I get to tell an incredible story, but also contribute something that’s not been studied before” says Hugh. He believes that humanity is now at a major turning point, therefore it is the adventures which contribute to society more which have the most value. 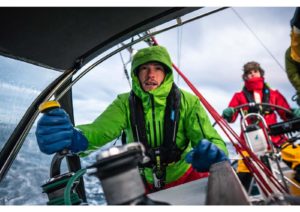 Hellbent on making a difference with the new knowledge they may find on the adventure, the team are also planning for the expedition to be as sustainable and non-invasive as possible. It is for this reason that they are travelling by boat, as it will be entirely wind powered and will not leave any pollutants. The team will also face the challenging feat of leaving no human waste behind in an effort to leave the landscape entirely untouched. The largest benefit of the 37ft expedition yacht is that it can get extremely close to marine life without disturbances such as noise. “We will take every precaution to not leave any lasting impact.” Hugh explains. “The best way to do that is just to follow the rule that whatever you take in, you take out.”

The Jan Mayen expedition will not only aim to raise awareness surrounding climate change through its ground-breaking research but also through the power of multimedia and storytelling. As a lover of the historical and geographical, Hugh believes that the combination of science and media is “one hundred percent” the way forward: “Through a total package of writing, photography, documentary, social media, if you include everything…it’s about putting the message out there. I think, fundamentally, the way that you can initiate change is by engaging with children [and] with younger generations, because it’s a cliche to say it, but it’s true: it’s the children of today that will inform the policies of tomorrow. They will be the leaders of the future.” 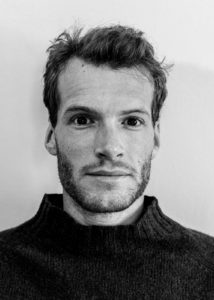 After nearly 12 long months, Hugh’s dream to follow in Wordie’s footsteps is finally coming to fruition. It is truly a testament to what can be done when one perseveres, especially as organising international travel, let alone an international voyage, is a “mammoth task” during a pandemic.

Getting to share stories that he is really passionate about since discovering the story of Wordie has fuelled Hugh’s mission to campaign for a better future – “I’ll be writing about this [expedition] for National Geographic U.K.  and for Oceanographic and Sidetracked magazines, and we’ve got a filmmaker, Hugo Pettit, coming with us. We’re going to be making a documentary and we have a few film festivals interested already. It’s really exciting to be in a position of a total storytelling capacity. Hopefully we are going to get some really great global exposure of some really important, interesting stories.”

“I looked down and realised I’d lost my left arm”

“I am proud of who I am, I never had that before”