On May 31st 2021, 20 year old Adriana Brownlee successfully reached the summit of Mount Everest, the highest mountain on earth, registering 8,848.86m above sea level. She is aiming to be the youngest person ever to climb all 14 of the world's peaks above 8,000m. Adri's mission to redefine female mountaineering is bold, brave & brilliant.

Brownlee recalls when she first had a taste of endurance mountaineering, at the age of nine having completed the National Three Peaks Challenge, where the climber has to ascend Ben Nevis, Scafell Pike and Snowdon, all within 24 hours. Brownlee actually caught hypothermia on her first attempt, but that didn’t stop her from retrying; and succeeding. 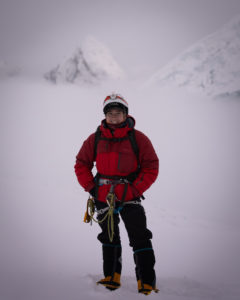 Brownlee’s inventory of mountains is vast, but what makes it all the more impressive is her age. Having put university on hold to pursue mountaineering full time, Brownlee is ticking off all the highest peaks in the world at the age of 20. Initially, Brownlee decided to climb the seven highest peaks on each continent – Everest, Aconcagua, McKinley, Kilimanjaro, Elbrus, Vinson Massif, and Jaya Peak – however, she came to the conclusion after three climbs that the seven weren’t enough to satisfy her need for adventure, thus she decided to take on the 14x8000m mountains as she needed “something a little more exciting” to “motivate” her. This entails climbing the 14 mountains in the world which are over 8000m above sea level, located in the well-known Himalaya and Karakoram mountain ranges of Asia. The 14 include Everest, K2 and Annapurna, and all 14 are in what is known as the ‘Death Zone’, where the lack of oxygen in the atmosphere causes physiological damage and can eventually kill you. The thrill of the chase up steep inclines is what makes Brownlee tick like nothing else.

The excitement of reaching Everest’s summit is yet to wear-off for Brownlee, as she details the climb to AMG. “I’ve pretty much been training for it since I was 16. So it felt like a long time coming. But it was just…it was beyond expectations” she begins. “It was beautiful. Overall, I didn’t find it as hard as I thought it would be. I found parts of it more difficult, such as going through the Khumbu ice fall, and going from camp three to camp four, I found that harder than the actual summit which is meant to be the worst day. But I think that was a good thing and it gave me confidence. It has ignited a flame inside me that wants to carry on further”. 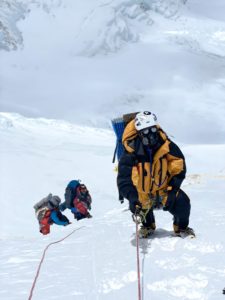 Brownlee is by no means a one-woman team however, with her guide Nirmal Purja a.k.a. Nimsdai accompanying her as guide and coach, and her father, who although has not done the biggest climbs with her, introduced her to the sport. Brownlee describes Nimsdai as a “machine”, and this is no exaggeration. Previously serving as a Nepalese Gurkha, Nimsdai is perhaps most well known for having completed the 14x8000m in a gnarly record of 6 months and 6 days. He is accompanying Brownlee on her challenge and serves as a major source of inspiration and motivation.

If successful in her challenge, Brownlee will become the youngest person ever to complete all 14x8000m peaks. The current record is 30 years 166 days, held by Mingma “David” Gyabu Sherpa. Most notably, Brownlee will be one of a handful of women to complete the challenge. Female empowerment is high on Brownlee’s agenda, and she argues that there are many female mountaineers, but it is the lack of press which makes it seem as if few are involved. In 2019 it was reported that there had been a major increase in women climbing Everest, stating that ‘Before 2018, of the 4,738 people to have summited Everest, 605 were women—that’s 12 percent. In 2018, there were 61 women climbers on the Nepal side and 49 made it to the top, or 18 percent of the total summiteers.’ In 2019, 20% of climbing permits were issued to women, a steady but certain growth: “it’s just something that needs to be put out there, which is definitely something I’m trying to work on as well.”

Brownlee’s next steps may be harder than the actual climbing itself: sponsorship. Mountaineering is not known to be a particularly affordable sport, with the cost of an expedition up Everest costing between $28,000 to $85,000 (£20,300-£61,500) according to mountaineer Alan Arnette. Due to her age and relative ‘inexperience’, she is currently finding it hard to convey the magnitude of the challenge to companies. Nonetheless, Brownlee knows that good things come to those who wait. She is incredibly determined to be one of the best, and youngest, in the game: slow and steady wins the race.