Team GB rower Josh Bugajski currently has his eye on the ultimate prize. Having recently won gold at the European World Championships in the Men’s 8+, beating both the Dutch, the Romanians and the Germans, it is only a matter of months until one of the most anticipated and overdue dogfights gets underway.

Despite this he is remaining reserved, acknowledging that the New Zealand 8+ are also recording fast times this year, and Germany have a great track record. The Australians and the Americans cannot be discounted either, yet the British eight is entering Tokyo 2021 as the favourite, having won gold at Rio 2016.

However, it has only been in the past year that Bugajski has secured his seat having suffered a freak injury known as accessory nerve palsy. “I’d slept in a weird position on the flight to our training camp in Namibia and woke up with a stiff neck” Bugajski explains, “which is quite normal for most people, especially when you’ve got six foot something people sitting in economy class who ended up sleeping curled up in weird positions.” Over the next few days, a niggle in his shoulder worsened, meaning he couldn’t utilise his right arm or the right side of his back properly.

Stumped, his physiotherapists referred him to a specialist who gave him the diagnosis – even they were “pretty baffled” at how a rower had achieved nerve damage which was more commonly found as a result of motorcycle accidents. “All the muscles that normally stabilized my shoulder were just not working” and made rowing impossible says Bugajski. At that point the current head coach, Jürgen Gröbler, gave Bugajski the verdict that Tokyo 2020 would not be on the cards due to the lengthy rehabilitation time. Bugajski had already made his peace with it. Determined to keep his fitness up he took an exercise bike home. 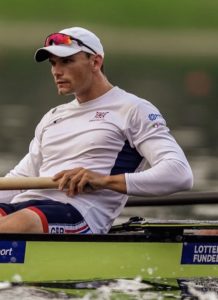 The following months saw a speedy recovery for the rower, with hours on the bike each day, electrotherapy, and physiotherapy. During this time, Bugajski found a love for cycling and competing with other elite rowers who had also been affected by restricted training times during the pandemic. After 7 months he was able to get back into the boat, and by Christmas the engines were fully firing again. The year-long postponement of Tokyo worked in Bugajski’s favour, seeing him re-focus for another gruelling period to get back into contention for the Olympics.

It is apparent that Bugajski almost enjoys being an underdog, partly due to the lack of pressure, but also because of the triumph when victory is secured unexpectedly. In his first year of racing for Oxford University he lost to Cambridge in The Boat Races by 2 and a half lengths, ending Oxford’s 3-year winning streak. “I think 2016 was a year in which I was kind of considering whether [the Boat Race] was going to be the finale for my rowing career. I accepted a while before it that Rio wasn’t going to be on the cards.  And I wasn’t sure at that point whether my progression was really enough to be pushing on for the Tokyo Olympics.” Crossing the line second in front of hundreds of thousands of spectators fuelled Bugajski’s desire for redemption, causing 2017 to be a “crystallising year”, winning the men’s Boat Race and driving him from a decent varsity rower to a strong international athlete. 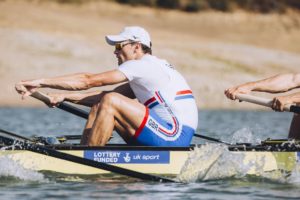 His underdog status also runs deeper than many of his peers, having grown up in less than favourable circumstances. Unlike the common perception that rowers are wealthy and privately educated, Bugajski hails from the northern town of Stockport and grew up in a single parent household. He was educated at a state school and participated in multiple sports, but overall found his formative years tough. The opportunity to study pharmacy at Cardiff University later led him to try out for the rowing team aged 20. As a latecomer to the sport, it left him wondering how rowing could have helped him whilst he was growing up, as well as how he could try to break down barriers in the sport which prevent many like him from taking it up as a junior.

“You can’t get around the fact that rowing is expensive” begins Bugajski. “Coaching is expensive, insurance is expensive, equipment is expensive… I think there needs to be efforts to remove some of those expenses and make it more accessible”. To him, participating in a sport such as rowing would have been “inconceivable” back in his teenage years. The world of rowing is making a positive effort in changing its public perception, with projects such as Fulham Reach rowing club’s Rowing For All project making rowing more accessible to those experiencing tricky social circumstances or financial hardship. Bugajski is keen to help others realise their potential on and off the water and is an ambassador for Love Rowing, British Rowing’s charitable foundation which creates accessible and inclusive programmes for communities that are currently under-represented in rowing. 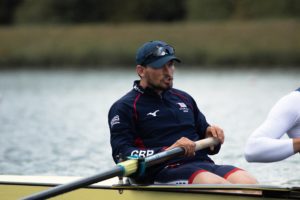 Other than plans to tick off a gold Olympic medal, a World Championship medal, and an elite open category medal from Henley Royal Regatta from his bucket list, Bugajski is hoping to make a real difference in the world of rowing with his ambassadorship and other future opportunities. “I have experience of the barriers that have gotten in the way of getting to the top of rowing” Bugajski highlights, and this first-hand knowledge that he can “bring to the table” will be useful in identifying what is stopping young people from reaching their potential in the sport. Finding your purpose is key to success Bugajski believes, and he is hopeful that he can help the next generation achieve this without the obstacles he encountered.