AMG athlete Sedem Ama discusses mental health during a pandemic, being a woman in boxing, and the necessity of immersing yourself in a supportive environment.

It is evident that women’s boxing is booming. Women’s boxing has existed as a sporting pursuit for a long time, however official competitions are a recent addition to the sports events calendar. According to sport sociologist, Professor Kath Woodward, the first European cup for women was approved in 1999, followed by a women’s boxing World Championship in 2001. Sometimes it is viewed as “controversial” Woodward writes – yet, irrespective of this, boxing is extremely positive for women. It allows participants to keep fit, learn discipline, and “gain self-esteem”. 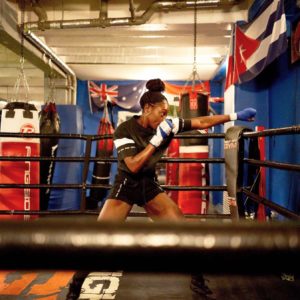 Keeping active, disciplined and maintaining a good level of self-esteem are all useful tools if we are to try and bear the impact of a third lockdown in the UK. Experts have been vocal about the potential mental health crisis for generations to come post pandemic. Figures published by The Telegraph revealed that ‘the number of children referred to child and adolescent mental health services (CAMHS) was 4,615 per 100,000, the highest on record and up nearly 20 per cent on last year’. In 2020, the Office for National Statistics reported that during the pandemic, depression in adults had almost doubled from what it was pre-pandemic.

Athletes are by no means unaffected either, yet it is arguable that we have something to learn from them. The Sports Injury Bulletin recently wrote that routine and exercise are key to better mental wellbeing, particularly in a period where we may face isolation. Amateur boxer, Sedem Ama, also recognises the importance of these tools in a period of uncertainty: “Completing a task, whether it be going for a daily walk means you have accomplished something, so it’s really important to find discipline to help during times like these.” 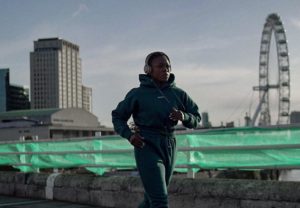 For Ama the benefits of boxing on not only her physical health but her mental health are unparalleled. Alongside her amateur boxing career Ama balances a full-time career in PR. It certainly makes her schedule somewhat pressured. A typical day for the boxer requires an early morning wake up followed by cardio or strength and conditioning, a full 9-5 day of work, and then a 2-hour session of technique and bag work at the club. “I have found that without training, my mood can falter and that’s simply because of the exhilarating emotions I get, even during a really challenging session” Ama writes. “Boxing gives me a sense of accomplishment. When I train in the morning, it gives me a fulfilment to conquer the day, and my evening sessions also allow me to then close the day and sleep well which is so important for recovery. Personally, without sport I would feel incomplete”.

It is evident that Ama is not alone in the search for endorphins either. The interest in women’s boxing has grown exponentially in the last 4 years. Data produced by Sport England shows that between 2018 and 2019, 420,400 females were involved with boxing and boxing related activities (such as boxercise). This has risen from 386,000 in 2017-2018, and 356,500 the year prior to that. “I love the fact that I’ve come in at a time when it is booming and people are paying more attention to [the] females in the sport” Ama explains. She acknowledges that boxing remains a male-dominated sport, but points out the salient fact: “females have talent too”. The ring is no longer a ‘men only’ zone says Ama, “we’re not just in there to look pretty…we can fight. If we want to box, we can box. If we want to brawl, we can brawl.” 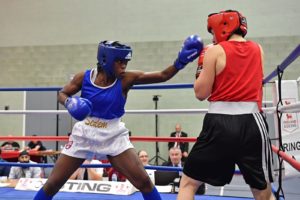 Perhaps what is key to Ama’s success thus far is her decisions to surround herself in a supportive, yet stimulating, environment. Not only does she have strong support from her family (though she does joke that they would prefer it if she “was playing golf” instead of watching her get punched), Ama emphasises the importance of her friendships too. “I only have friends who are as ambitious as I am” she highlights “and that’s not by accident”. For Ama it is crucial that to be passionate about one’s purpose those around her should be similar minded: “We all push each other to be the best in whatever area we’re in.”

Passion and purpose in Ama’s personal network translates directly to her sports ethic. Originally she started at Double Jab Boxing Club, however her hunger for progress lead her to Repton Boxing Club which prides itself on being one of the oldest established boxing gyms in the country, and one of the most successful. The club’s motto is ‘Non Viscara…Non Gloria’, which translates to ‘No guts…no glory’ and indicates how seriously they take their training, whatever level the athlete may be. Immersing herself in a competitive atmosphere is what brings out the best in Ama, pushing her harder and polishing her into an exceptional athlete. 2021 has begun unfavourably for many, however keeping active, being disciplined and staying connected in a supportive environment like Ama are key to moving forward. 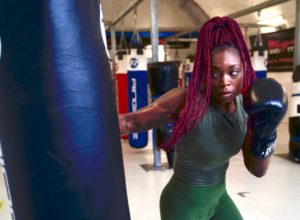 From Brixton gangs to boxing at the 02 | Isaac Chamberlain

“As difficult as it might get, it will never be as hard as losing”

How Tyson Fury became the heavyweight champion for mental health

“Making a positive difference is my calling” | Stacey Copeland