Hailing from Rochdale, Greater Manchester, Azeem Amir is looking to make big strides not only as a blind football player, but also as an entrepreneur and activist who wants to create better awareness for disabled people in the UK. Click to read the full inspiring story.

Azeem Amir is in his early 20s and has already graduated from Salford University with a master’s degree, started his journey as an entrepreneur and represents England in his sport. Evidently a high achiever, it is also worth noting that Amir was born with vision impairments. His journey has been by no means easy, however you can be assured that the young athlete has no intentions of stopping just yet.

Unlike many children with vision impairments, Amir attended a mainstream education school and had to adapt to his environment to learn, even if it meant being resourceful and creative. Keen to join in, Amir played football alongside other pupils but struggled with the visual aspects of the game. It wasn’t until he turned 15 that someone suggested he try blind football. Initially it was a hobby for Amir and he played for a club Merseyside, slowly developing his skills until he was scouted. Now, he plays for England and has hopes of taking it all the way to the top.

The game of blind football is still relatively unknown, and because of this the facilities and the networks are much smaller and more concentrated in the UK. “It’s very much like an individual sport when you’re away from a team environment and you’ve got train on your own” Amir tells The AMG, “so yeah, it’s been challenging at times”. In spite of the hurdles which he faces as a para-athlete, Amir has been fortunate to forge strong and meaningful connections to allow him to train.

As well as aiming for Paris 2024, the footballer is on a mission to raise awareness surrounding disability by focussing on the lived experience of disabled persons. Whilst at university Amir set up his business Learn With ESS (Education, Sport and Speaking) with the hope of giving abled people a better understanding of what it is like on a day-to-day basis for a disabled person. The desired result, says Amir, is developing the skill of empathy via fun and interactive workshops. “I don’t remember maths lessons or science lessons” Amir reflects, “but I remember the interactive experiences I had in school”.

Discussion surrounding disabilities is often limited to the Paralympics, and although the event is a great way of showcasing the potential of those with disabilities it fails to keep the topic high-up on people’s agendas, thus limiting social movements in favour of positive change for disabled people. Amir believes that important discussions such as these should start when we are young, therefore Learn With ESS has been providing large workshops in schools to increase awareness. The desired impact for Amir is what he calls “lightbulb moments”. Making people think about how disabled people face daily challenges can really stimulate students to understand and consider alternative perspectives, an element which Amir believes is key to raising awareness for people with disabilities and improving their day to day lives.

Going virtual was a new challenge for Amir when the pandemic hit, however he has only seen Learn With ESSexpand. Originally the business was run by Amir and some of his family members, however people were quick to understand the importance of the footballers’ mission. Now, Amir’s team boasts a network of volunteers from a wide range of backgrounds: “I really enjoy the fact that people became passionate about what I was passionate about, and that’s why I’ve got a good team around me who are helping to grow the business.” 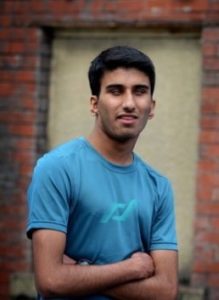 Learning to adapt and overcome has been a constant theme in both Amir’s personal and professional life. He is keen to stress that even when times are tough, perseverance is key but so is knowing how to enjoy the process. “You don’t have to be the next Jeff Bezos or the next Steve Jobs” he explains, “You don’t have to grow an empire or a world changing organization. You can just have your small business that backs people on a local, practical and genuine level. There’s nothing better than that really.”

My Life Choice Was Simple. Football Or Gangs | Nathan Mavila

A positive role model for the younger generation | Kayleigh Green

For the love of the game | Louise Quinn