What happens when an athlete experiences a life-altering injury? It is a question which few discuss, as many consider degenerative illnesses and accidents as the end point of an athletic career. However, there are a handful of athletes which have falsified this widely-held belief, and have seen incredible success as para-athletes.

Currently, almost 1 in 5 people in England have a long-standing limiting disability, illness or condition reports The FA. Recognising this, football has undergone a great deal of positive change in England. Now, the FA has two under-21 squads, six male elite squads and one female elite squad, covering a large portion of the disability spectrum.

“Honestly, I’d never imagined I’d become a Paralympic footballer” begins Alistair Patrick-Heselton when reflecting on his journey into the sport. “I turned away from it initially” he explains, “but the more and more I researched about it I thought, ‘actually, I could give it a go’”. After a car crash which claimed the life of his friend, Alistair had to come to terms with the fact that he could no longer play football as he knew it. Evidently talented from a young age, Alistair had signed for QPR after being a schoolboy with Wycombe Wanderers and having a short spell with Oldham Athletic. He continued to play semi-professionally with Northwood and finally Wingate & Finchley. However, his journey towards professional premier league football was cut short by the traumatic brain injury caused by accident, resulting in a 2 month coma and a verdict from doctors that he may never walk again.

It is no surprise that Alistair had not considered para-football before, as statistics from 2017 by the FA show that only 3.4% of English football clubs have a disability team, this translating as 769 out of 22,450 clubs. Although it is a small percentage, it is a number which is steadily growing.

Similar to Alistair, footballer Stephen Daley played “mainstream football” up to under-18 level, but was diagnosed as visually impaired and eventually had a reduction in his sight as a teenager. He, too, was unaware of the glory he would achieve later on in life with para-football, and initially gave up the sport because he no longer enjoyed it: “It was one of them careers you either made or you didn’t.”

Fascinatingly, Stephen’s visual impairment did not affect his skill in the football game. Though it did force him to understand the game from a new perspective, he discusses how “if you played the game, you don’t really lose your technical aspect”. With decreased visibility, Stephen said he had to “learn about how [his] impairment affected how you play in a game”. Though it was an uphill battle, Stephen’s ability to refine his spatial awareness has paid off: not only has he had a long career of 25 years he also represented England 143 times, captaining the team and leading them in both world and European championships. Towards the end of his career, Stephen played back to back world cup finals.

Even though life has often proved challenging for Alistair and Stephen, they remain undeterred in sharing their story about how they overcame physical adversity to achieve sporting greatness. Now, the two have become FA Role models and hope to inspire the public to recognise that physical limitations do not have to curtail one’s ambitions. Though it is an entirely voluntary role, it is something which both athletes take great pride in. “I don’t think it really dawned on me [until] the back-end of my career” Stephen says in reflection. “My view was that I always play to do the best that I could do and lead by example…I don’t think that someone can teach you that because you’ve got to have certain qualities to be part of England [football team], but also then to be a captain.” He admits that he never really considered himself as a role model until the latter stages, where he realised that his advice and experience could be extremely influential.

Although the taste for glory has been something which spurred both athletes on, Alistair believes that Paralympic-level football has allowed him to ground himself and understand the sport on a deeper level. Though he was originally told that football would be impossible to play after the injuries he sustained, Alistair made his England debut at the Cerebral Palsy International Sport and Recreation World Championships and scored: “when your team mates run over and start hugging you, you’re thinking ‘wow, this is what football is all about’”. Since then, Alistair represented Great Britain at the London 2012 Olympics and was inducted to the National Football Museum Hall Of Fame. 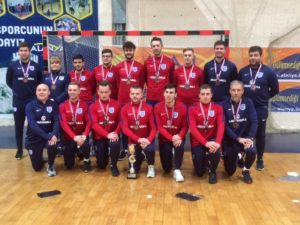 Today, the duo are hoping to inspire the next generation, as well as making the sporting community more aware of what it is like to be an athlete with differing abilities and combatting the stigma. Alistair shares that “enjoying what you have” is key if you are searching for satisfaction, regardless of the level of football you are aiming to play at. “The one thing that I’ve always tried to do from all my experiences is to extract the maximum amount of enjoyment from them” he explains, as “striving for things which might not be there” can lead to unhappiness – athlete or not. “You probably find a lot of people with a disability or an impairment are very resilient because they have to be, you know, even getting public transport, going to job interviews sitting in a classroom with other mainstream children because you’re different” is really challenging, Stephen chips in – “but there’s nothing wrong with being different.”

Even though they are no longer playing football, Alistair and Stephen have found that they remain motivated by their experiences. “I know what the days are like when you actually can’t do anything – it’s really boring!” jokes Alistair. “While I’m alive and able to do things, then I’m going to keep on doing it because there will come a day when we feel that we don’t have the fight or the energy to keep doing things that we love doing. So until that day comes, I’m just going to keep the pedal to the metal”.

There is so much to learn from Alistair and Stephen, who have now both retired from the game and hope to teach people about their experience. When asked on what he would advise himself prior to his Paralympic journey, Alistair says that his advice would not change as his mentality is the same as when he was an able-bodied young professional: “enjoy every moment and just treat it like it will be your last, because it does go so quickly.”

My Life Choice Was Simple. Football Or Gangs | Nathan Mavila

A positive role model for the younger generation | Kayleigh Green

For the love of the game | Louise Quinn