Team GB triathlete and force of nature, Sophie Coldwell, is one athlete whose focus has remained sharp in lockdown. Training hard for the competitions she knows will come in 2021 she enjoys a balanced lifestyle relaxing with fiancèe Tom, cuddling her 2 dogs & chasing her 8 rescue chickens named after drag queens! Exclusive interview here...

Though she presents a superhuman exterior Coldwell is more than personable. A self-proclaimed chatty chicken-rescuer, she is a down to earth and laid back when she isn’t Zwifting or completing tempo hill runs. Currently she resides in Loughborough in her home shared with elite ultra runner, and now fiancée, Tom Evans. However, let it be known that she is a revered triathlete on the international circuit, and is looking to medal at the next Commonwealth Games along with winning more ITU podium finishes.

For Coldwell, the reality that her sport is her job continues to be one of some disbelief.  She recognises that she is “fortunate” and “very, very, VERY lucky” to be able to race and be sponsored to do so. It is a rather modest and underplayed opinion of her chosen profession, as she has worked extremely hard to be one of Britain’s top triathletes.

Having moved to Nottingham in 2000, Coldwell became involved with one of the largest triathlon circuits in the UK. She began competing at the age of 8, and has not looked back since. Over the years she has gone from good to great, winning gold at the 2018 European Championships, finishing 6th at the Gold Coast Commonwealth Games and several podium finishes at the ITU Triathlon 2019 World Cup races, including gold at Cagliari and silver in the mixed relay at Edmonton. She is currently ranked 15th in world.

Prior to the pandemic, Coldwell regularly trained in groups and found it extremely motivating when the tough got tougher. Due to similar goals the athletes are all able to push each other more than they may be able to do on their own – “we’re all very competitive, we are all pretty good at what we do” Coldwell explains “and we want to get the best out of each session”. 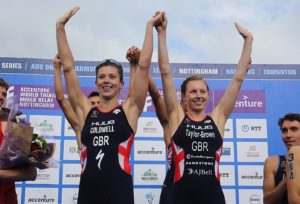 It is not unusual that Coldwell is out on the track on her own however, with triathlon often being a highly individualistic sport. Competitors regularly see themselves in a position where they are leading the front in a solitary style. “It’s a bit of an odd one in that situation” Coldwell begins, “because part of me is like ‘this is amazing, you’re out and you’re on your own, no one’s around you, you’re running fast and everyone else has to keep going’ and then the other part of you is like ‘Oh my God, I’m out here on my own! Everyone’s shooting for me.” This play off in the mind is something that can occur in competition, however staying positive, committing to the situation and not looking behind you is a tactic Coldwell enjoys executing.

Now that she has to train solo more, she is finding that a lot of adaption is required to get the best out of her sessions. On making these changes, Coldwell says that “A massive thing that gets me through [training] is having people around me, having a coach that is there for the majority of the sessions and them giving me support”. What she now must focus on more than ever is having specific targets. For her, the goals that she sets out to complete are often enough motivation to push her when the training gets gnarly.

Hunting down target scores and milestones is a huge part of keeping us motivated Coldwell believes, commenting that without it everything feels “slightly pointless”. Running organisation and community, Jogging Buddy, also promotes this. ‘Being clear about your intended goal is essential for ensuring that you progress towards reaching them’ is key they argue, pointing out that if you share your goals, particularly with those that matter, you are more likely to commit to them. 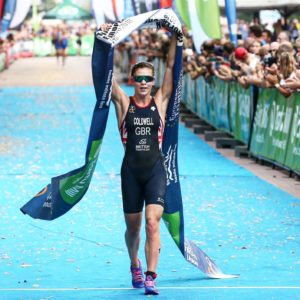 The prospect of an event is another motivator for Coldwell, even if we have to be a little tentative with many events’ materialisation being uncertain. Big or small, having a clear focus is key to changing our attitude: “whether you’re doing couch to 5k, whether you’re doing your first triathlon…it doesn’t matter how big or small you think that goal is” Coldwell tells AMG. “If you set that goal every time you start thinking ‘Oh, I can’t really be arsed but I want to achieve this, I want to be able to do that, I want to be able to run this far’…and all of a sudden your whole attitude changes because you’ve got a date, you’ve put a timeline on it and everything you do is a step closer to achieving that goal that you’ve set yourself.”

Another nugget of wisdom Coldwell offers to those who may be finding the training tough is accepting the reality that “bad sessions happen all the time”. However we should not dismiss them, but rather reflect on why the session was bad and how we can put in preventative measures to ensure that we can perform as well as possible. Even if they dampen the mood a little they are sometimes unavoidable says Coldwell: “we’re only human and you have still gone out the door and done it at the end of the day!” 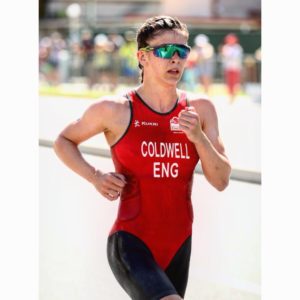 Being home more has also allowed Coldwell to settle into a routine, and having a partner who understands the needs for afternoon naps and dinner after a late session is pretty beneficial – “ I like to say that I do half of the cooking, but I definitely don’t, Tom does the majority of that” Coldwell laughs.  Sometimes their training will cross over, and they enjoy mountain biking together on Thursdays; understanding each other’s training demands and supporting one another are key ingredients for fulfilment beyond the triathlon course. 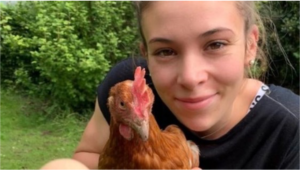 De-stressing is also a major part of being an athlete Coldwell highlights. A large contributor to her relaxation is her animals, dogs Poppy and Rocco, and her 8 chickens that were rescued from battery farming. She is also a qualified nail technician, and believes that it is important to have other things going on in your life that are unrelated to your sport. A good balance – and a dose of cuddles and attention from one’s furry friends – is essential. 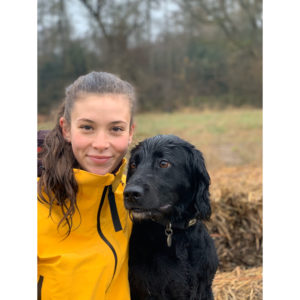 Though only 26 years old and with many years ahead of her, Coldwell’s sagest advice is that “an arrow has to be pulled to go forward. So when times are tough and you feel like you’re being dragged back, keep firing, and you’ll go forward in the right direction.”