“It’s the little conversations that add up” | Kirstie Urwin

It is perhaps an understatement to describe Kirstie Urwin as ‘competitive’ as it is clear by her dazzling junior career that she gets a major kick from sailing. As she has climbed the ranks from the 420 class to the Nacra 17, she has been able to reflect on her journey so far.

One thing that Urwin was acutely aware of during her junior career was that she could only ever compete in single gender categories, with the 420, 470 and 49erFX classes being separated into male and female. However, when Urwin progressed into the Nacra 17 class – the fastest and most technologically advanced boat class – she was then able to pair up with male athlete, Rupert White. 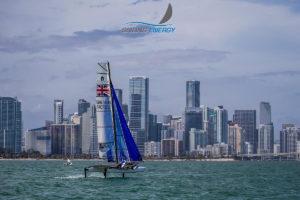 Both Urwin and White were selected to go to the 2012 ISAF Youth World Championships in Dublin, with Urwin bringing back a bronze and White a gold. White had also recently won another world title and Urwin the European title. During this period of amazing success the two became great friends, however they continued to compete separately until 2015.

During the interview, Urwin explained how she found the Nacra 17 class as deeply empowering for it has the ability to break down gender stereotypes that sport is so often tainted by. When the class was introduced “the immediate assumption was that all of the crews would be male and all of the helms would be female because of the physical aspect of the crews role”. However Team White-Urwin, along with multiple other teams, went against the grain and placed White at the helm, and Urwin as the crew: “so many of us have just completely smashed that misconception out of the water and proved time and time again that there’s absolutely no reason why we can’t compete against those male athletes and do just as good a job as them, if not a better job.” 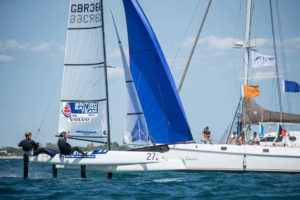 Breaking this barrier down further, the Rio 2016 Olympics saw Nacra 17 gold, silver and bronze medals being awarded to Argentina, Australia and Austria respectively. All three of these teams had a male helm and a female crew. Urwin commented that this was quite unexpected, but nonetheless a humongous victory for female athletes: “the medallists that Rio 2016 [saw], were all the opposite way around in terms of physicality…and that’s a really empowering thing. I think when it comes to women in sport, it’s all about sport being open-minded and giving people the opportunities.”

Challenging the status quo is a major part of Urwin’s philosophy, and certainly a principle that she carries throughout her training and competing. Being a woman in sport is doing just this she suggests, but we need to be more aware of how we treat female athletes in comparison to men and the expectations that we hold these athletes to in a gendered light: “I think every time you challenge a female athlete on what they can achieve…you beat down what their own internal perspective of what they can achieve is, and we need to be building those athletes up. We need to be saying to female athletes there’s no reason why you can’t achieve what male athletes are achieving…And as you challenge yourself, you can break those expectations and prove them wrong.” 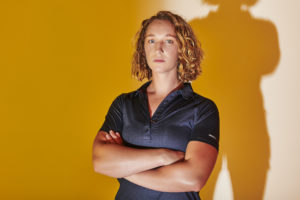 Urwin is keen to state how elite sport is not only physically challenging but mentally challenging for those who participate, too: “there’s challenges to being in an elite sports person because of the level that you’re pushing your performance to, and you’ll strive [for] perfection in everything you do. Obviously there’s going to be challenges in terms of your mental health but I think it’s all about the balance, realising that you’re competing in a sport, you’re getting to travel around the world and trying to really draw on the positives of the mental side”.

Having undertaken a mental health first aid course and completing a degree in Sport Psychology Urwin has found herself aware that not only does being active bring a release, but sailing also allows her to “learn about different cultures, different perspectives” and meet people that show you “what you can achieve and what can be done when you put your mind to it”. All too often athletes are portrayed as indestructible superheroes which can lead to mental health being put on the back-burner in many elite sport communities. Only recently has discussing mental health in elite sport really moved into the spotlight, for example the BBC documentary on Andrew Flintoff and his battle with an eating disorder, and West Ham United captain Gilly Flaherty discussing her mental health struggles.

In 2019, The Independent reported that athletes have helped provide a huge shift in attitudes to discussing mental health. Deputy CEO of charity Sporting Chance, Shellie Heather, stated that “The more players/ex-players that speak openly about their issues in the press and media often leads to a spike in calls”.

Communication and de-stigmatisation are key to moving forward Urwin highlights, and something which athletes, coaches, and the teams can do more of. Sports ultimately should not be an area which shies away from discussing mental health, but one that promotes it’s importance: “if we can be vulnerable…[and] really show that despite those issues that we have and those challenges that we have, we’re able to rise above that and perform to such to an elite level, then there’s no reason why anyone else can’t break through those barriers as well.”

“It's the little conversations that add up” | Kirstie Urwin