“I’ve got that chance to build something & make a difference.” | Hannah Mills MBE
Min Read

“I’ve got that chance to build something & make a difference.” | Hannah Mills MBE

Taking on the world is a task which many Olympians dedicate their lives to. Hannah Mills MBE, however, is taking on the world in more ways than one. Not only is she hoping to defend her Olympic title from Rio 2016, but Mills is also hoping to spread awareness and inspire the public to take the environment into their own hands and reduce plastic pollution.

Plastic pollution is a major problem which directly affects Mills. Her entry into the sport was a humble beginning – she has sailed since the age of 8, having started at a small club in Llanishen, Cardiff. Her realisation that plastic pollution was having a dire effect on the environment was both gradual and sudden. Though she was fond of geography at school she decided not to pursue it at university. Regardless, the pull to live an impactful and purposeful life beyond sailing continued to quietly bubble away.

Mills’ search for Olympic Gold at Rio built at a steady pace over the years. In 2012 it looked like she would seal the deal, winning gold at the World Championships in Barcelona. At the London Olympics it all came down to a tiebreaker race between the GB crew and New Zealand. Sadly it was not to be Mills’ year and she had to settle for silver at her home games. “The toll of London took us aback” Mills disclosed to the British Sailing team YouTube channel, confessing that her and teammate Saskia Clark considered not competing at Rio and calling it a day after winning silver. The decision to put everything on the line again and go for gold in Rio was not one they took lightly, however they found an extraordinary amount of strength to complete another cycle in pursuit of Olympic victory. 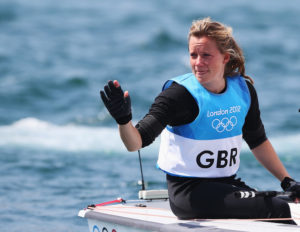 It was not only Olympic victory which Mills found at Rio, but a realisation that she had the power to bring forth great change: “spending a lot of time in Rio really opened my eyes to how bad the pollution problem was getting because we see it everywhere we go – we see it on beaches, in marinas, out at sea…but nowhere was quite like what we saw in Rio”.

In August 2016, the National Geographic website reported that Guanabara Bay, the competition site for water-based sports at the Rio Olympics, was full of rubbish, raw sewage, and waste dumped by pharmaceutical companies, refineries, and oil and gas terminals. National Geographic further reported that multiple athletes were ill after training on the polluted water, including Belgian sailor Evi Van Acker.

Mills’ experience ignited something within, and the light-bulb moment made her realise that she could “do something about this as an athlete and as someone who’s teaching these things, but also if I carry on to Tokyo, I’ve got that chance to build something and hopefully make a difference.”

Fast forward a few months later, Mills began to formulate what is now known as the Big Plastic Pledge – a movement which unifies sporting communities to make a change in their wasteful habits and minimise their impact on the environment. “I think there’s loads we can do as individuals and that’s kind of partly why I set up the Big Plastic Pledge” Mills explains. It is the smaller actions which, if endorsed as a collective, can have the largest effects.

Slowly but surely, we are beginning to see a change in attitudes towards the environment in sport. In the UK there is a developing shift towards greener sport, particularly in football. Forest Green Rovers football club in Gloucestershire have been dubbed by FIFA as “the world’s greenest football club”, introducing multiple sustainability measures by targeting their food sources, energy provisions, a pesticide-free pitch, and electric transportation. Tottenham Hotspur have also made notable changes, and plan to phase out and eventually eliminate the use of ‘plastic straws, stirrers, cutlery and all plastic disposable packaging that accompanies these items’ at their stadium. The Big Plastic Pledge identifies the refusal of single-use plastics and the encouragement of reusable coffee and beverage cups, food containers and cutlery as a great method of reducing plastic pollution.

Mills has now set course for the Tokyo 2021 Olympics, and she plans to stimulate conversation surrounding plastic pollution as she does so. In December 2020 it was announced that she was to become an International Olympic Commission sustainability ambassador, alongside Norwegian rower Martin Helseth. The position will allow Mills to spread the word of collective environmental responsibility in sports, encouraging not only athletes but fans to be more considerate of their actions and inspiring those who are less aware of the European roadmap for a more sustainable future. A sustainable Olympics is a major part of the IOC’s agenda, with Paris 2024 set to be the first ‘climate positive’ Olympics. 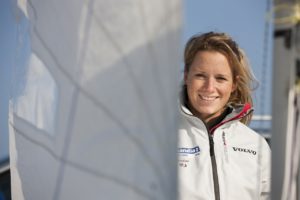 For Mills, using the Olympics as a platform for sustainability is critical: “sporting events like the Olympics [are] almost like mini-cities in a way because of how they work, how many people are involved, how much infrastructure is required, all that kind of stuff is a really good testing ground for innovation and new ideas… if we can prove the concept [of plastic pollution reduction] at big sporting events like that, with the sort of platform that those big sporting events have to talk about and promote what they’re doing, the chances of accelerating these new ideas into wider society can be integrated a lot quicker”.

The road to Olympic glory has been testing for Mills, as she hopes to go for gold again in the 470 class with new partner Eilidh McIntyre. Mills was hoping to retire in 2020 post-games, but due to the pandemic she was forced to rethink. With a title to defend she is aware that the racing will be all guns blazing, with rivals hoping to pip one of the most dominant teams this Olympic cycle has seen. “I definitely feel it’s a bit of a target on our backs at times, but that’s cool. It’s a good place to be” says Mills. She is unfazed by the feat ahead and immensely collected. Mills is one of Britain’s athletic titans, and one of the most influential at that.

“It's the little conversations that add up” | Kirstie Urwin