Women’s involvement in rugby has seen an incredible increase in interest over the past decade. AMG athlete Marlie Packer discusses how 2021 could be the biggest year yet for the sport, as well as how her life has changed as a parent-athlete.

Named as one of the top ten female rugby players in the world by The Telegraph for ‘her industriousness at the breakdown’ earlier this month, one can only wonder how much more Marlie can give the world of rugby. The answer is: one hell of a lot.

Currently, Packer has made 74 appearances for England, and plans to make it more. However, her attitude to the game has changed over the years she explains. As she has had a few injuries over the past few seasons, she is looking to “Play every game as [her] last”, focussing on completing one game at a time. “Every game that I play in I want to be one of the standout players and be the best player on that pitch” says Packer, and this has reduced her number of long-term ambitions and bettered her outlook: her rugby style has shifted to one of quality over quantity. 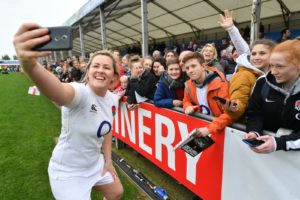 2021 is set to be a huge year for women’s rugby, with many hoping that the 6 Nations tournament will still go ahead in early spring, plus the Rugby World Cup 2021 which is set to be held in Autumn in Auckland, New Zealand.  Statistics in 2019 showed that women’s rugby has had an unprecedented increase in interest, with participation levels reaching an all-time high with 2.7 million players globally.  England Rugby also stated that more than 40 per cent of rugby’s 400 million fanbase are female. Packer is hopeful that the year will take off.

When Packer started rugby at an international level she did not think that she would ever get paid as a professional rugby player. Much to her surprise, she was offered a Rugby 7s contract soon after making the statement in a televised interview in 2013, which lasted for 4 years until 2017. It was only in January 2018 that the England Women’s rugby team, also known as the Red Roses, were offered full time contracts, making them the first women’s rugby team in the world to go fully professional, reported rugbyspeakersuk.com. The game has gone “from strength to strength” Packer beams. As the game becomes more regularly televised the better the coverage of women’s rugby will be Packer believes, and the team will be even more motivated to show how exciting the women’s game is: “If we keep getting better and challenging each other…we will put on a performance that people will want to pay and come watch and really enjoy.”

Of course it is not just the fans which Packer is looking to perform for now, but her partner and their new-born son, Oliver. Life has changed drastically for Packer since becoming a mother, however it has only added to her drive to play the best rugby she can. Upon being asked whether her focus on rugby had lessened since her entry into parenthood, she was quick to highlight that Oliver and rugby are joint in priority. Though they are “two different sides” of her life they greatly complement each other: “everything I do from now is not about making myself and my family proud, but making sure that my son can look back and say, ‘that was my mummy at the World Cup’”.  To inspire the next generation, as well as her son, is a major goal for Packer.

It is by no means easy to balance the two however, evidenced by Packer’s deflation that she will be at the Rugby World Cup during Oliver’s first birthday. She likens parenthood to the game in that you can “read all the books in the world” on what to expect – you can analyse the tactics, replay the scrums – but you will not truly understand what to do until faced with the situation. “You have to adapt very quickly and deal with what’s actually in front of you” Packer advises sagely.  Though this is her first child, it is clear that the sport her has taught her valuable lessons beyond the pitch. She credits her partner, Tash, as well as friends and family for helping them adapt to family life.

With 4 Grand Slams, 1 World Cup win, and back-to-back Tyrrells Premier 15s titles it is possible that Packer is one of England’s most successful players, yet this is not slowing her down. “I’d like to become a back-to-back Grand Slam champion” says Packer, as well as beating the All Blacks on their home turf this autumn. The overall goal is to remain the number one women’s rugby team in the world, as well as a number one mum to Oliver.

"You Play For One Another & Put Your Bodies On The Line."| Marlie Packer