“You Play For One Another & Put Your Bodies On The Line.”| Marlie Packer
AMG stories Min Read

“You Play For One Another & Put Your Bodies On The Line.”| Marlie Packer

Marlie Packer is a sports woman on a mission. She has won back-to-back Tyrrells Premier 15's title with Saracens, 3 Grand Slams in her 71 caps for England and the 2014 Rugby World Cup. A wonderful character both on and off the pitch Marlie Packer is the epitome of today's professional sportswoman - committed, ambitious and a winner. She talked to us about her love of rugby, her stellar career to date, her rugby heroes and her ambition to play in the 2021 NZ Rugby World Cup.

How did you get in to playing rugby

When I was 5 or 6 a friend’s parent took me from school.  My mum thought I was going to watch a rugby game so dressed me in  jeans and a red frilly top and I came back covered in mud – I’ve loved it ever since!  My weekends were always full of sport.  Football on a Saturday morning and rugby on a Sunday morning.  As a single mum my mum did an amazing job with me and my brother getting us to all our practice sessions. The only memory from when I was younger of me maybe having to give up rugby was when football was on a Sunday which was the same day as rugby but obviously I chose rugby and 71 Caps in for England I’m pleased I did! 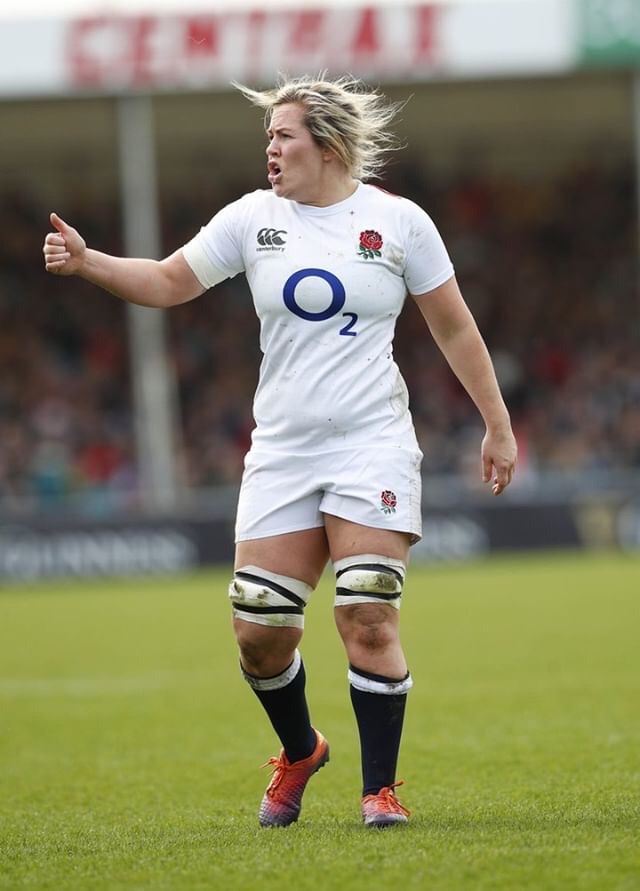 There’s loads of amazing things about playing rugby.  For me it’s the people you meet, the friends you make and the fact that you play for one another and put your bodies on the line whether that’s for your country or for your club.  I’m lucky enough to play for my country so when we come back to league games a lot of the girls I play against are very good friends of mine off the pitch, and we go all out against each but then afterwards we have a drink together whether that’s a beer or a cup of tea. 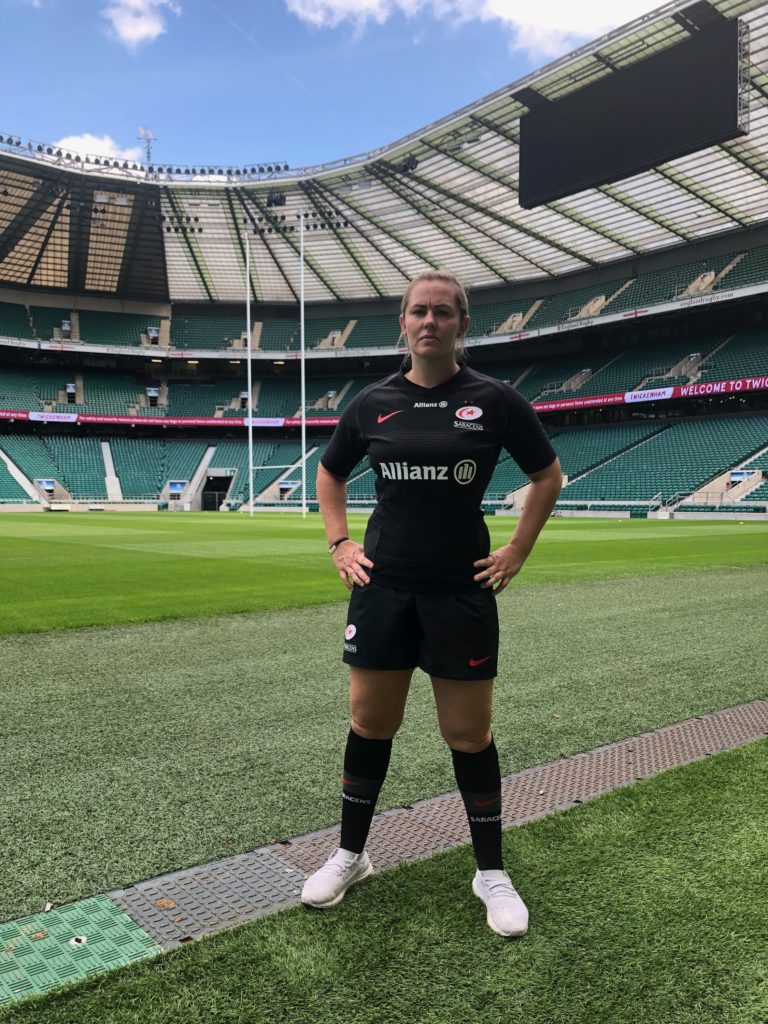 Juggling home life balanced with the training load for me.  Once again I’m lucky as I am one of the 28 players with a full-time contract with England Rugby but that has only been for the last two years!  Before that I was a plumber.  So for the players I play alongside at Saracens they have to balance work life with training and playing.  Which means long hours.

What do you think of the media coverage of women’s rugby?

It’s getting better – obviously for me as a player if I keep becoming better and the teams around me become better then the games will become better and people will want to watch them more.  I think if you take it back to the last World Cup final in 2017 it was on ITV 1 at 7pm on Saturday night – that’s prime time Ant & Dec time which was incredible.  We need to see more of this sort of scheduling on free-to-air TV.

What more can be done to bring sponsors into women’s rugby?

At the moment England are taking the Red Roses on the road to play their international games around the country which I feel is getting more people to come and watch and getting bums on seats and, importantly, sponsors want to see that!  And it’s great to get to an audience that might not come to London to watch women’s rugby.

What ambitions have you got left in the game?

I want to go to the 2021 World Cup over in New Zealand, not only as a part of the squad, but as one of England’s best open side flanker players.

How important is the mental side of rugby?

For me it’s massive – playing rugby is something that mentally has been amazing for me but then at same time I’ve also struggled with depression from the pressures of the off-field side of rugby and life.

What are you planning to do when you retire from rugby?

I would like to get into coaching.  I’m currently a level 2 coach and after the World Cup I’m looking to become a level 3 coach.   Also, I’d like to go back to plumbing.  I worked for a company before where I worked on emergency breakdowns and I enjoyed that kind of work as it was helping people and getting to meet new people.

Which player do you admire most?

Sarah Hunter – she is the epitome of a Red Rose & truly someone I look up to and aspire to be like – but also the amazing thing is I get to call her a good friend as well. 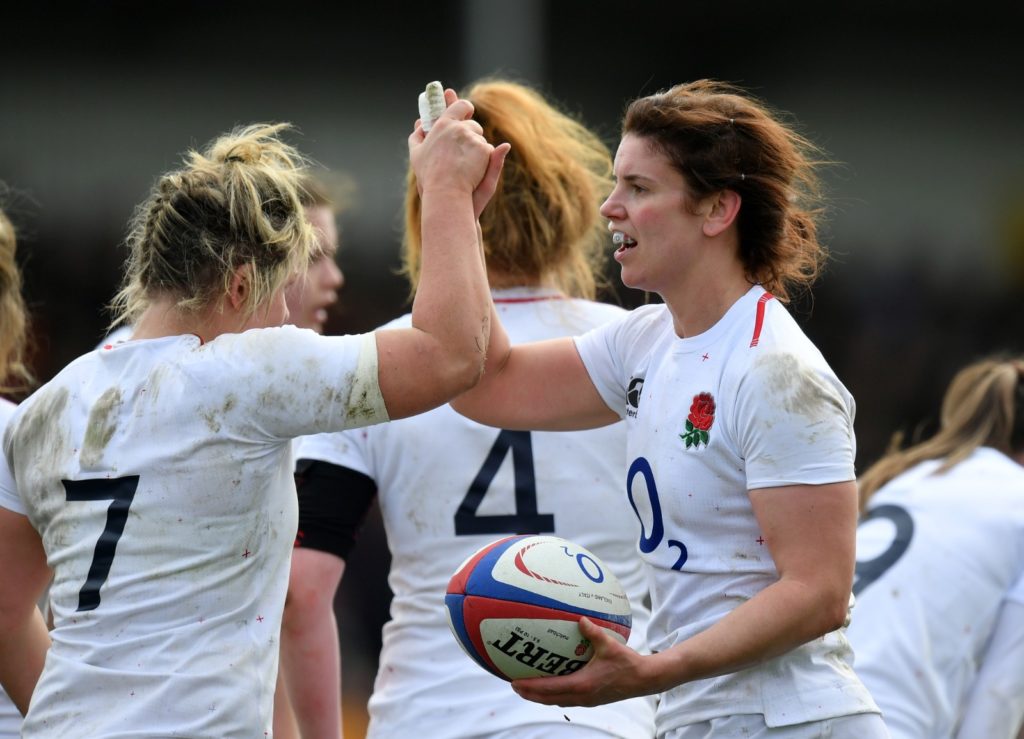 Who are your rugby heroes (male and female)?

Jonny Wilkinson for that 2003 World Cup kick and for me as a coach it would be Giselle Mather.  She was my coach with England Under 20s and just made me believe in myself on and off the field.

What one piece of advice would you share with today’s young rugby players who want to play for their country?

Keep working hard and enjoying it and make sure you do those little 1-2 %  things even if you don’t feel like doing it at the time because down the long run it all adds up!

"You Play For One Another & Put Your Bodies On The Line."| Marlie Packer