Upon first impressions, it is quite evident that Salahudeen ‘Sal’ Hussain is an extraordinary 15-year-old. Like many teenage students in the UK, Sal has recently sat his GCSE exams. In addition to 10 GCSEs grade 9 to 7 (the equivalent of grades A to A**), he became the youngest person to complete the ‘Fan Dance’, a 15-mile load bearing march up the western face of the Brecon Beacons mountain Pen-Y-Fan which is used for the UK’s Special Forces selection process.

Sal joined the Royal Marine Cadets in 2018 with the hope that it would give him a “a sense of discipline and a solid routine” in his life. Having been bullied in school, Sal was initially reluctant to join as it was severely outside of his comfort zone. It was only a matter of time before he found himself fully immersed in the new world cadets introduced him to, expressing that the decision to join was “one of the best decisions” he had ever made. “Since then I’ve been subject to so many opportunities” Sal tells the AMG, “and I’ve met so many wonderful people that I would never have met if I hadn’t [joined].” 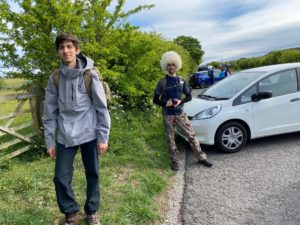 The decision to do the Fan Dance was an easy one for Sal. The march was a test of perseverance but also a fundraiser for his detachment and the Special Boat Service Association (SBSA). As all SBS members must undergo the Fan Dance, Sal saw it as a fitting tribute to those he looks up to. With his father, Gul Nawaz ‘Naz’ Hussain QC, Sal would prepare with long walks in the Peak District, as well as utilising the local Steel City Steps in Sheffield for tough uphill sections of the Beacons such as Jacob’s Ladder. They would do several routes on Mam Tor and Win Hill, gradually extending the distances, getting up at 5am for extensive walking, often in the rain. 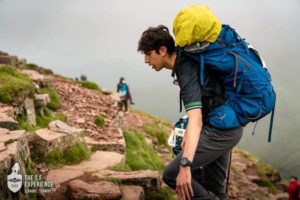 All of the training, Sal’s father disclosed, twice transcended Ramadan and therefore required Sal to have no food or water during his training hikes. Overall, Sal would be fasting for approximately 18 hours a day on top of the exercise. Though it gave him the confidence that he could complete the Fan Dance with only a few items for refuelling, it did lead Sal and his father to underestimate the nutritional needs on the day: “All we brought with us were water, two Capri Suns and a couple of Mars bars because we were still used to fasting…that turned out to be a punishing lesson.” Pretty soon, Sal’s salt levels were depleting at a rapid rate. For a time this slowed Sal down significantly during the second half. Thankfully, with a few sachets of electrolyte powder and a steely desire to finish, Sal overcame the error and powered on.

A major factor which lead to Sal’s success was his unassailable levels of motivation. Knowing that many had donated to the cause, he felt that he would be letting down his supporters if he were to not finish the course: “I quickly told myself that giving up just wasn’t an option. Even when it got hard and I felt like quitting, I just had to take it one step at a time, picking out points in front of me and saying ‘okay, in five minutes I want to be there, and then I can go to this point and that point’ and take it in sizable chunks. If you look at all that lies ahead, you’ll just get overwhelmed and you’ll defeat yourself mentally.” He also kept in mind phrases used by the Special Forces, such as “Always a little further” and a useful reminder by his Sergeant, “If you think you can’t go on, go on.” 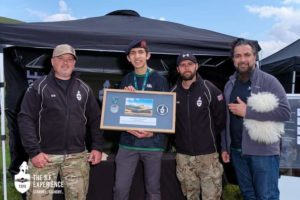 For Sal, the toughest part of the Fan Dance was the notorious Roman Road, a long rocky section leading to the halfway point. When he reached the end of the section, he realised that his bag was overweight by 5kg, leading him to ditch the excess luggage and readjust. Nonetheless the image of the finish line kept Sal going. In the end, he broke out into a run to cross the line so he could “finish strong” in front of a joyous crowd.

Physical fitness was not the only thing Sal gained from the two years of training and the challenge itself. He identified two major lessons from his triumphant feat: preparation is key, and persistence is essential: “we’d send letters to organizations just to be silently rejected and we could have easily given up and stopped putting this link out and getting more donations, but we didn’t. We carried on, and we actually got past our target of £5,000”.

Such lessons have been deeply instilled in Sal by his father, who found that when growing up people often try to project their own shortcomings and fears onto you. “If they can’t do something or don’t want to do something, they can’t possibly imagine that you could” explains Naz, “And I said to [Sal], look, you know, that happened to me, and you can’t let that happen to you. You have to find what you believe in, and you’ve got to be single-minded and focused on it and not allow haters to affect you.” 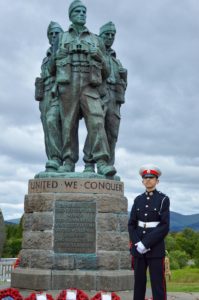 As Muslim men, Sal and Naz are keen to represent their community and their allegiance to the British armed forces. Recently, Sal discovered that the Royal British Legion (RBL) sold Islamic crescents for Remembrance Day  without a poppy attached, unlike other religious tributes that were sold. Taking initiative, Sal sought to change the tribute so that the contribution of Muslim soldiers from the Commonwealth during the first and second World Wars was recognised in exactly the same way. The RBL agreed explaining the discrepancy was due to erroneous advice they had received.  Muslim soldiers in the World Wars “performed amazing acts of gallantry, but nobody knows about them” Naz highlights, “I think it’s really important that this is taught at schools because I’d like to think it would help deal with low-level bigotry”. He believes that this knowledge and shared history should be wider known in Britain, and it would certainly help the third and fourth generation of Muslim children “feel [like] a bigger part of society.”

With a great sense of cultural pride and jubilation, Sal has set his sights on bigger challenges as a cadet, such as a historic 9-mile load-bearing speed march in Scotland. However at the top of his list, Sal is hopeful of becoming a reserve as soon as he becomes of age, as well as enrolling in medical school. Even at the age of 15, anything is possible for Sal, as long as he puts his mind to it.